home Features A Trip to Tuscany: A Rich Canvas

I knew I had to return to Tuscany some day. My first visit, some 20 years ago, was part of a whirlwind motor coach trip of 11 European countries in 21 days through UCSD Extension. Loved that experience, but this time around, I was eager to be grounded in one spot and soak in the culture.

Lucky for me, my friend Doris Rice, who teaches watercolor classes each spring in Coronado, had just the venue: Spannocchia, an 800-year old “tenuta,” (agricultural estate) a few miles southwest of Siena, in the heart of Tuscany. Rice has been teaching annual watercolor classes on this working farm for the past several years through its affiliated nonprofit Spannocchia Foundation. 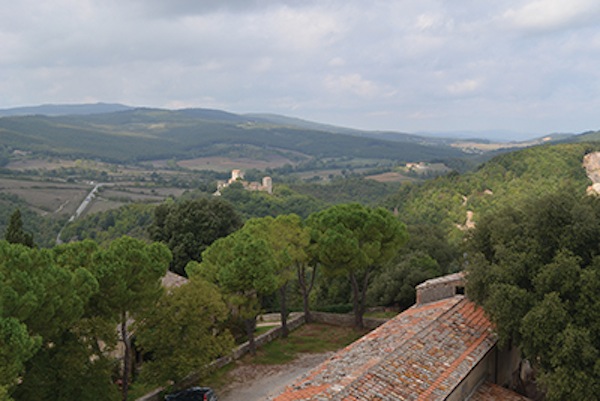 If truth be told, the workshop was an excuse to revisit a region I’d been dreaming about since reading Frances Mayes’ first book, Under the Tuscan Sun, and watching the movie of the same name repeatedly.

Rice hails from Portsmouth, N.H., and my fellow students were mostly from the New England area, a bonus, as I also learned more about that region of the country. Our group of 12 was mostly women, some married, some widowed. We had two couples on the trip and one mother-daughter team. All had a sense of adventure and conviviality, essential since we not only painted together, but also dined family style on fabulous farm-to-table “peasant” food, most of it grown at Spannocchia. We’d gather in the villa’s brick-lined dining room each morning and evening and often for lunch when we weren’t out and about, visiting the nearby hill towns of Siena (30 minutes away) and San Gimignano, with its skyline of ancient towers (about an hour’s drive).

Everything I dreamed about this vacation, and then some, came to pass. I knew it would be so, as my flight circled the countryside around the Florence airport, Aeroporto di Firenze-Peretola, its name just a sample of the lyrical Italian I’d hear throughout my stay. On this clear day, I had my first birds-eye view of Tuscany, redolent in cross-hatchings of rolling vineyards and olive orchards that stretched as far as the eye could see.

Our group arrived within a two-hour window at the airport, and off we went with our luggage and paint supplies via two vans on an 80-mile ride to our destination. As we drew close, Rice pointed up to what appeared to be a castle on a  hill. It was Villa Castella de Spannocchia’s 58-foot tall tower standing watch over us. Soon we were winding our way up a well preserved and tended dirt road with stone bridges and culverts that must have been there for centuries, a hard concept to get your head around when you’re from Coronado, where scrub brush and jackrabbits were the only inhabitants just 130 years ago.

Yes, we painted every day, mostly at different venues on the estate, and with the “limonaria” (a large room where the estate’s potted lemon trees reside from November through April) serving as our studio. Rice provided a short tutorial and helpful suggestions along the way, but there’s really only one way to learn to paint: by doing.

We found lovely spots to paint at Spannocchia, including a “secret garden” with its pond that was created as a peacock watering hole. One afternoon, with a light rain falling, we painted on the patio outside our dining hall, capturing an arbor of grape vines that framed the villa’s windows. We climbed the tower stairs to survey the valley from its bell-tower rooftop, and we positioned our easels on the hill above the olive groves to take in the castle itself. At the colorful Siena farmers market, we painted fruit and vegetable stands, fish and cheese mongers and locals who gathered their weekly produce.

We enjoyed tours, lectures and adventures that introduced and explained the richness of this region where the Renaissance once flowered. We toured Spannocchia’s mill operation and viewed ancient quarries where marble and stone used in the construction of the property and surrounding areas was once mined. We learned about olive oil, with little details such as “olives here are pressed within 36 hours of picking.” At a “salumi” tasting we sampled lardo (pure fat back), rigatino (belly), prosciutto (aged 18 months), salami (pork shoulder, seasoned with peppercorn, salt and garlic) and soppiesatra, cooked and flavored with cardamom, cinnamon, garlic, nutmeg, cloves and lemon. Okay, brace yourself, I’m going to tell you where soppiesatra comes from: the head of the pig, including everything from eyeballs to teeth, boiled down over four hours. It was delicious, and it was part of the philosophy of sustainability: not letting anything go to waste. After all, that pig gave his life, and therefore, at Spannocchia, it is appreciated and everything except the skin is consumed.

At a cooking class, I learned to shape pasta into seashell shapes for gnocchi, prepared the tastiest bruschetta with the reddest tomatoes I’ve ever seen, and learned that the Italian word for food processor is so apropos: Robot de Cucina.

As I withdrew from technology and television, I rediscovered the pleasures of reading late into the night. Just before turning out the light on one quiet evening, I couldn’t help thinking, as I looked about my high ceilinged bedroom, that these same walls were standing when Michelangelo was chiseling his David a few miles away in Firenze (Florence).

Rice, who also teaches watercolor workshops in France, Mexico, Taos, New Mexico, Mohegan Island, Maine specializes in “en plein aire” painting, where natural light contributes to the composition. Toward that end, she encourages her students to acquire an appreciation of each workshop locale. “No matter where we go, I always teach the fundamentals, but that’s just a part of the experience,” Rice explained. “You have to feel the indigenous culture. The philosophy of food, art, and history — how people live — is something that should implode on your senses. Only then can you really capture the feeling of a region.”

For years, until after World War II, Spannocchia (now 1,100 acres; but once 2,500, with chestnut forests occupying much of its land) was part of the mezzadria sharecropping system, where tenant farmers were provided farmhouses by the landowner with whom they split their profits. The Spannocchia family was one of the great feudal clans that controlled much of the Tuscany countryside during the medieval period. Brogia Spannocchia once served as treasurer to the pope and built some of the architectural masterpieces that still stand along the shell-shaped Piazza del Campo in Siena, considered by many to be among the most beautiful medieval public squares in all of Europe.

A Florentine hatmaker, aristocrat and novelist, Delfino Cinelli, acquired Spannocchia in 1925. Cinelli married Francis Hertz, who hailed from Detroit, Mich. Their son, Ferdinando, took the estate in a new direction as it developed programs in archaeo-logy through the establishment of the Etruscan Foundation in 1958. Upon his death in 2002, Ferdinando’s daughter Francesca, who was raised in America, and her husband, Randall Stratton, have managed the estate, and created the Spannocchia Foundation, headquartered in Portland, Maine.

Randall first met Francesca when, as a historical preservation student from the University of Kansas, he knocked on the front door of Spannocchia’s villa. The couple, who split their time between Spannocchia and their home Cambridge, Mass., have been actively involved in preserving and enhancing the estate. Randall noted that the villa and its seven farmhouses had suffered from “benign neglect” until the 1980s when he and Francesca began assessing the infrastructure. Since then, he has supervised the replacement of all the electrical systems and galvanized pipes, and all the roofs. And with a labored sigh, he proudly added, “And we’ve redone 32 bathrooms in the 20 years I’ve been here.”

Spannocchia’s penchant for sustainable living includes organic gardening and introduction of livestock including sheep, chickens and a heritage pig, Cinta Sienese. As we sat down at each meal, we would start by unfolding our linen napkins, which were rolled in sleeves with our names on them, and used throughout our stay. After each meal, we would recycle our waste into two barrels: “slop” for the pigs and recycling for the rich compost used in the three gardens.

I never expected to learn or be so appreciative of a pig from a watercoloring class. One of the striped animals even came to be a subject in my painting.

Each evening at 7, our group would gather on the terrace to watch the sunset while enjoying estate-bottled wine. By 7:30 we’d be called into dinner, where we feasted on meals in the Italian tradition: primi (usually a pasta dish), secondi (a protein, often a pork dish, with side courses of fresh — fresh! — vegetables), a third course, (a simple green salad) and dolce (often homemade cookies or tarts.) 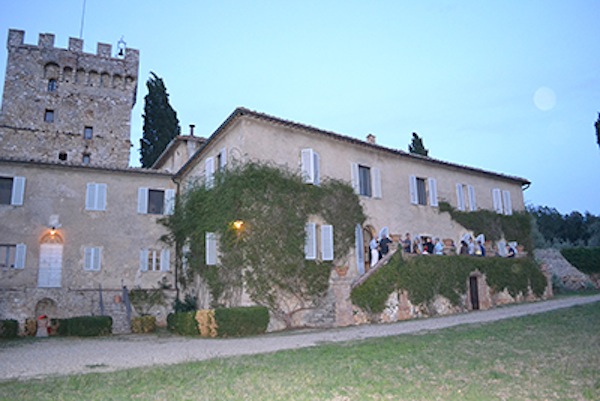 Through the foundation, the working staff of the estate is expanded with 24 interns, most coming from American colleges. Interns pay $250 for the privilege of working in one of four areas over the course of four months: gardens, vineyards (and olive groves), animal husbandry and guest relations. They receive free room and board, take part in extracurricular trips and learn Italian. Many have returned as vacationers; some have held destination weddings at Spannocchia.

You can visit Spannocchia as part of an educational class, or you can simply go as a tourist, staying in the villa through its bed-and-breakfast program, or renting one of the farmhouses by the week.

As Randall Stratton said, Spannocchia does stay with you. “A lot of people say there’s something about the place itself, they just sense it, it gets to you, you fall in love with it. There’s an atmosphere, we can’t really put our fingers on it, but you feel it.”