The Corvettes are coming to San Diego Automotive Museum in October, but before you get fired up about classic sports cars, you have a chance to flash back to the car toys of your childhood.

The idea of creating an automotive museum in Balboa Park came from the late Briggs Cunningham, who is remembered each year when a trophy in his name honors a driver for inspiration and sportsmanship at the Coronado Speed Festival. The late resident of Rancho Santa Fe and former Newport Beach resident who operated his own museum in Costa Mesa until 1987, was known as both a sports car racer and designer as well as captain of the victorious U.S. entry in the 1958 America’s Cup. 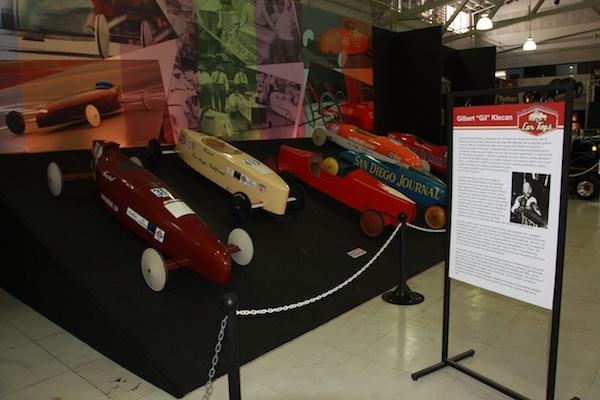 The idea circulated for many years until a group of local automotive enthusiasts propelled the idea forward. In 1979 the San Diego City Council first considered the issue and in 1980 they gave unanimous approval to the museum and granted a long-term lease for one of the historic buildings in Balboa Park. After spending approximately $1 million renovating and upgrading the building, the San Diego Automotive Museum opened in December of 1988. Since then millions of local auto enthusiasts and tourists from all over the world have visited the world-class collection. The Museum is located next to the Air and Space Museum at the southern end of the park.

Rotating exhibits are kept fresh to draw a changing crowd, but the mainstays of the museum should be of interest to anyone with even a passing fancy about automotive history. Among the permanent displays are Louie Mattar’s “Fabulous $75,000 Car” that he drove non-stop across the country and themotorcycle Steve McQueen rode in the film “On Any Sunday.”

Executive Director Paula Brandes says the challenge is making the museum “as compelling to an 8-year-old girl as it is to an 80-year-old man.”

She said the goal is for people to have a good time, learn and be entertained.

Ninety-five percent of visitors are not “gearheads,” she said, so the focus is on telling the story of automotive culture.

The current “Car Toys” display is particularly a fun one for summer when it’s “family time” and attendance goes up, she said. You can get a look at a collection of Lusse Auto Skooters – remember bumper cars? – or ogle over a display of Matchbox Cars.

One older gentleman visiting with his son looked over the shiny pedal cars, which include a mini-Weinermobile and a Buddy L (“Quality Built Since 1921), and remarked that he wished he still had his.  “Probably wouldn’t be that shiny after 80 years though,” he said.

Nearby sit Radio Flyer wagons and an assortment of tricycles and bicycles.

With a nod to San Diego, there’s a Nissan concept Z-car designed in the company’s local studios, and a display, complete with a Model A, featuring some of the original planks from the single-lane wooden road built across the desert that was the predecessor to Old Highway 80 and then Interstate 8.

Next to that sits Brandes’ favorite – Mattar’s 1947 Cadillac-turned camper. The owner of an auto repair shop on Market Street took his wife’s pride and joy and turned it into an “endurance car,” she explained. He added everything from a chemical toilet and bar to a telephone and TV. It carried 230 gallons of gas, 15 gallons of oil and 30 gallons of water, according to the brochure that tells the story. Mattar and his co-drivers’ first adventure was a 6,320-mile cross-country roundtrip from Sept. 20 to 27, 1952, with fuel added by fast moving trucks at Kansas City, Mo.; Camden, NJ, and Omaha, Neb.” Two years later he journeyed from Anchorage to Mexico City, garnering TV and newspaper attention along the way.