home In The Spotlight Take a Tour! 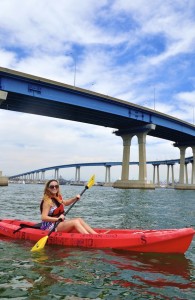 Coronado’s compact size and water surroundings both lend themselves to a wide variety of options for exploring the island. Whether you’re a tourist who is just getting to know Coronado or a local who wants to gain a new appreciation for your city, there’s a tour that’s just right for you! 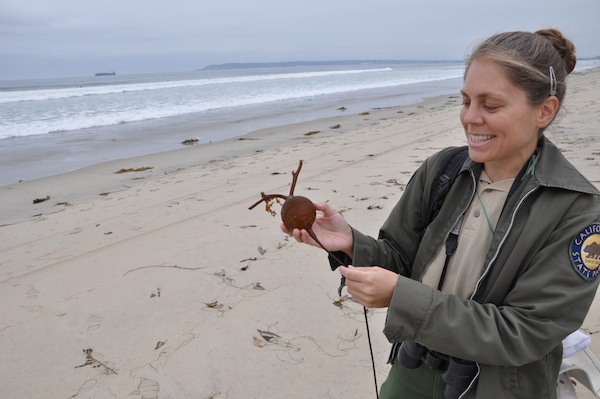 Loews Coronado Bay Resort does a lot to support Silver Strand State Beach, including providing funds to support the position of Heather Sanderson, a State Park Environmental Educator who has been leading educational tours at the beach since early 2008. Sanderson leads nature walks on weekends, kayak tours (starting soon), campfire programs, a Junior Ranger program for children, and a two-hour tour on Sundays, The Silver Strand State Beach Explore & Restore Tour. That tour leaves the Loews lobby and proceeds to the Strand’s bayside beach, where Sanderson points out the flora and fauna that make their homes in the area. “If the tide is out, we’ll likely see the bayside Fiddler crab in the mudflats,” she said. “Sometimes we’ll see birds with long skinny beaks, marbled Godwits, poking around for their crabs as their morning meal.”

Tourgoers might spy osprey gliding over the water. “They’ll dive into the water and grab a fish in their talons,” Sanderson said. “That’s pretty exciting to see.”

Sometimes, tourgoers will spot a Common Bottlenose Dolphin in the ocean, she said, “And every once in the while, we’ll see them swimming and jumping out of the waves; they’re having fun.”

After the first hour of education, Sanderson’s group will participate in volunteer activities, such as a group beach restoration or clean-up. Volunteers are given bags and gloves and encouraged to pick up any trash or recyclables that they feel comfortable handling. “I talk about the hazards of plastics to wildlife and humans,” Sanderson said. “There’s usually a great deal of small plastics and cigarette butts that have floated up on the shoreline from the ocean.” 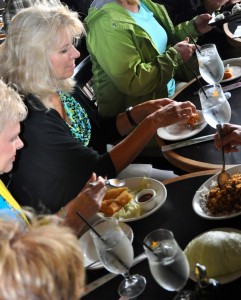 The tour stops at five area restaurants and food purveyors with strolls through nearby neighborhoods, with Trenchi providing insider tips on shopping, eating or just relaxing in the city. Our first stop on the Friday tour was Bistro d´Asia, where we enjoyed California rolls, spring rolls and chicken lettuce wraps. During that first stop I got to know some of my fellow tour participants a bit; by the end of tour we were “old friends.” Next, Trenchi took us over to Star Park Circle and told us stories about famous Coronadans.

At Café 1134, at 1134 Orange (naturally), we assembled in the charming backyard garden. Although the bistro was really busy during the lunch hour, Trenchi had organized everything perfectly, and our Caesar salad and crunchy baguettes were served promptly. Next stop was the Museum of History and Art, where we viewed the dress of locals from a century or more back.

At Coronado Taste of Oils, we sampled olive oils, ranging from blood orange to spicy green chili, and balsamic vinegars, and ended with chocolate balsamic vinegar drizzled over vanilla ice cream; delicious! Many of us purchased oils on the way out; a perfect Coronado souvenir. We ended with a get-together at WineStyles, a cozy wine store with a tasting room where all tour participants sampled one white and one red wine, both from California. Owner Patty Nordengreen explained the characteristics of the wines we sampled.  Again, tourgoers picked up wines or wine accessories to send to loved ones. From this last stop, we were set free to amble away for more shopping along Orange Avenue or make our way back to our cars at the marina.

The Coronado Walking Tour, Coronado’s oldest running tour is owned by Nancy Cobb. Cobb has lived in Coronado since 1965, arriving here when her father was Captain of the USS Kittyhawk during the Vietnam War. Cobb and Jerry MacCartee, who arrived in Coronado in 1968, founded the walking tours in 1980. MacCartee took a 10-year respite from the tour circuit, but has returned to assist Cobb in leading the groups through the annals of Coronado history; both women have served as past presidents of the Coronado Historical Association.

The tours depart from the Music Room of the Glorietta Bay Inn three times weekly. Glorietta Bay Inn is a 100-room hotel built around the Mansion of John D. Spreckels, the sugar and shipping magnate who owned the Hotel del Coronado almost from its infancy. Cobb, with the aid of historic photos, takes tourgoers through five centuries of history of Coronado, beginning with the landing of Spanish explorer Juan Rodriguez Cabrillo in 1542. Her chatty narrative picks up steam when she introduces her charges to entrepreneurs Frank Babcock and Hampton Story. The always entertaining Cobb brings history alive as we cross over to the grounds of the Hotel del Coronado (we don’t go inside, that’s a whole other tour). Moving briskly, we skirt the Del’s perimeter, but Cobb has already told us about the hotel’s first outdoor-lighted Christmas trees, and the stories of the hotel’s colorful owners, including former U.S. Ambassador to Switzerland M. Larry Lawrence, over its 125-year history.

Cobb knows the city inside out. As we walk down Ocean Boulevard, Cobb can tell us stories about the people who lived in a home – any home –and the provenance of the house over the years, including – groan – any homes that were destroyed so that a “new improved” home could replace it.

“We cover the physical history – the architecture and planning of the city – and the people history,” Cobb said. “Stories about the people are really what makes it so much fun and it’s what we can really relate to.”

Cobb emphasizes the Navy’s influence on Coronado’s development, including the impact of the Pearl Harbor invasion and how that single event transformed Coronado’s destiny from a center of trade to a major military installation. “History tells the story of the past and the future,” says Cobb. “And Coronado’s history is a microcosm of the history of the world. We start with the expansion of California, the Gold Rush, the “Go West Young Man” days, the influence of the Panama Canal, water distribution, the rise of various modes of transportation. Take airplanes, for example. One of the reasons we have North Island Naval Air Station is that Coronado’s mild climate made for ideal flying conditions.”

Sashay up to a Segway

You´re searching for more action? Climb aboard a Segway! You will meet your guide, Norman C. Funk, behind the Bank of America, off Orange Avenue. The tour begins with an introduction on how to use the Segway and how to control it on the walkway. You will do some test drives but Funk points out, “This is safer than riding by bike.”

It took a bit of getting used to. I learned I had to keep my feet stationary and pointed forward; if I were to point my feet sideways, the Segway would veer left or right. So after an hour, my legs started to feel a bit numb (I quickly recovered with a quick “shake out.”) The group rides along the golf course on Glorietta Boulevard, then picks up the dedicated bike path that leads under the Coronado Bridge, past Tidelands Park and to the Ferry Landing. You’ll cover more ground and see more scenic beauty on a Segway tour as you move along briskly and stay cool on these spacey-looking vehicles.

Rent a Ferrari or a Classic Porsche!

Have you always dreamed of getting behind the wheel of a red hot Ferrari Spider? Now you can for as little as $400 for four hours, long enough to take a spin up to Del Mar, have dinner at a seaside restaurant and cruise the coast highway home. You can choose from a number of exotic cars through Veloce Motors, who deliver the cars to the Beach Village parking lot at the Hotel del Coronado.

Brian Miller, who is the director of the membership at the Club at the Del, will make your dream come true. Car choices include an Aston Martin: imagine being James Bond for a day or just feel the wind in your hair by driving the white Del Signature´56 Speedster, this 356 Porsche Speedster was commissioned for the Del’s 125th anniversary. Or you can choose a Lamborghini or a classic Porsche Carrera. Miller said that many of his guests enjoy the four-hour rental, allowing for a memorable birthday or anniversary gift or “just the hottest date ever.”

Jump on (and off and on again) the Old Town Trolley 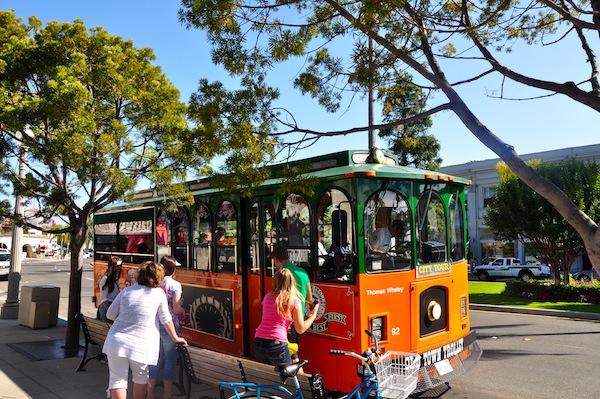 Old Town Trolley Tours are a perfect way to see San Diego without the hassle and expense of driving and parking at major tourist attractions. The always entertaining Old Town Trolley drivers will escort you to San Diego’s major attractions including the San Diego Zoo/Balboa Park, Little Italy, the Embarcadero, Horton Plaza, the Gaslamp Quarter, Seaport Village and Old Town. You can hop on and hop off as many times as you’d like, just grabbing the next trolley that comes along (in the summer months, trolleys run every 20 minutes or so). Tours run daily with two stops in Coronado, in front of McP’s Irish Pub, 1107 Orange Ave., and at the Ferry Landing.

On the water Tours

The new Bike & Kayak Tours store at the Ferry Landing offers two-hour “urban” kayak tours of San Diego Bay daily from 11 a.m. till sunset. Equipped with kayaks, paddles and life vests, you and your kayak group will gather on the small beach just south of Il Forniao restaurant. 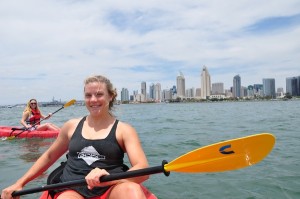 You’ll paddle along San Diego´s downtown skyline, with your tour guide pointing out architectural highlights of the cityscape. You’ll pass the USS Midway museum and North Island Naval Air Station, learning a bit about the military’s history and present-day operations. Then you’ll paddle south, beneath the graceful curve of the Coronado-San Diego Bay Bridge, learning about the construction of the bridge back in 1969. Next, you’ll travel down the Silver Strand a bit, before turning north once again and dropping your oars at the Ferry Landing.

First-time kayakers are welcome on the tours, which begin with a 10-minute beach lesson on kayaking. For children, double kayaks accommodating an adult as well as a child, are recommended. Tours are limited to 10 kayaks with two tour guides provided for all tours of six kayaks or more. The store also rents kayak and paddleboards.

Cruise the Cays canals on an authentic gondola 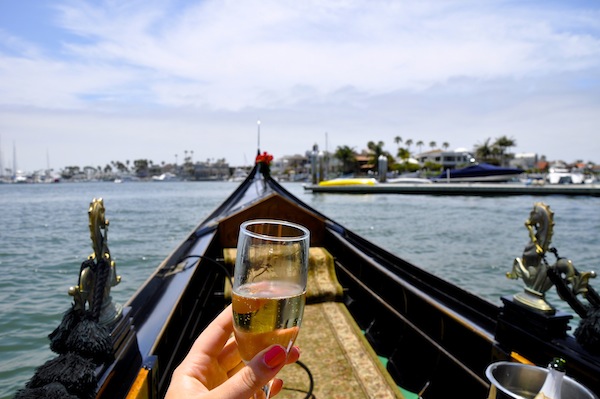 Venice, Italy is pretty far away, but you can still savor the flavor of Italy by boarding a gondola at the Loews Coronado Bay Resort Marina. You’ll glide along the waterways of the Coronado Cays, San Diego County’s only waterfront community, where yachts are often tied up at back doors of luxury homes.

While listening to recorded Italian arias along the way, you’ll enjoy champagne and chocolate-covered strawberries, and if there’s a nip in the night air, have no fear, blankets are provided. Want to know more about Coronado or San Diego? Ask your gondolier, he will gladly share his insider tips! And for those who want the most authentic Venetian package, ask for Enrico as your gondolier; he will sing the most romantic “O sole mio” you’ve ever heard!

Coronado Heritage Tour The Coronado Historical Association’s tour begins at the Museum of History & Art on Wednesdays at 10:30 a.m. and focuses on the history and architecture of the city’s downtown district. $10 per adult, children under 12, free. Reservations required; (619) 437-8788.

Public Art (self-guided) Pick up a map or Coronado’s various public art installations at the Coronado Visitor Center, 1100 Orange Ave. (619) 437-8788 and view mosaics, murals, sculptures and more throughout the city.

Cycling (self-guided) Explore Coronado’s charming neighborhoods and waterfront on your own schedule. The city’s 15 miles of relatively flat bike paths and even more miles of bike routes make for a leisurely way to explore. You can rent bikes at the Ferry Landing and at several locations in the Village (Holland’s Bikes, Little Sam’s and Wheel Fun Rentals).