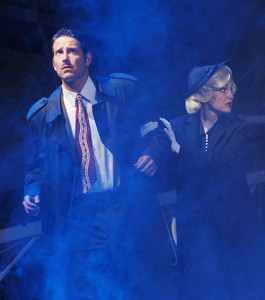 Thrilling and very funny, The 39 Steps is a melodrama based on the 1935 Alfred Hitchcock film, but performed with a cast of only four, requiring lightening fast quick changes. The script is full of puns and allusions to other Hitchcock films including Rear Window, Psycho, Vertigo and North by Northwest. The 39 Steps debuted in the United States in 2007 and won the Olivier Award for Best Comedy the same year.

Deborah Gilmour Smyth plays a teacher heading to a final exam in this triumphant winner of the Pulitzer Prize for Drama.

Lamb’s musical troupe takes a romp through the tunes of the 1980s.

Through Sept. 22 The Tempest

William Shakespeare’s play is set on
an enchanted island.

The rockin’ ’60s musical is set in a laundromat where Cindy works. It’s her birthday and everything seems just swell until the postman arrives, delivering some bad news (“Please Mr. Postman”). Among the 28 tunes of the ’60s are a number of Burt Bacharach and Hal David hits (“Don’t Make Me Over,” “Anyone Who Had a Heart,” “Always Something There to Remind Me”), and some Beatles and Neil Sedaka favorites.

Coronado Schools of the Arts presents:

From Chopin to Coltrane, from piano to electric bass, with some saxophone thrown in for good measure! CoSA’s instrumental music recitals feature a wide variety of musical styles and instruments. Black Box Theater at Coronado High School.

Think pirates are swashbuckling, scary guys who run around with skulls and crossbones? You haven’t met the tenderhearted Pirates of Penzance, or Frederick who had the misfortune of being born on Leap Day — Feb. 29. In the CHS Main Stage theater. 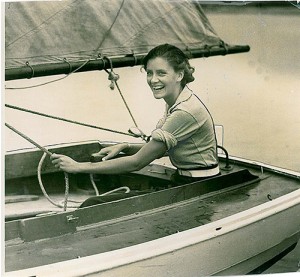 Coronado’s history as a center for yachting is featured in historic photos and artifacts from each yacht club on the island, most notably Coronado Yacht Club, which celebrates its 100th anniversary this year. Highlights include an Olympic Gold Medal in sailing won by native son Robbie Haines in 1984, a beautifully crafted wooden sabot built by a local craftsman and recorded interviews with long-time Coronadans about their yachting and racing experiences on a touch-screen video kiosk. At the Coronado Museum of History and Art; (619) 437-8788 or www.coronadohistory.org 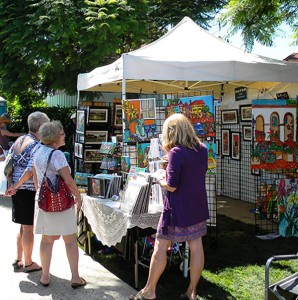 This year’s Art Walk promises to be cooler than ever (and organizers are not just referring to the temperatures that soared above 100 degrees last year!). The annual event will bring together more than 100 artists from around the country who will display their works of paintings, ceramics, jewelry and mixed media in a juried show, ensuring the overall quality of the artists’ work. The event also involves activities by the art galleries at the Ferry Landing and throughout town, and Art in the Park at Spreckels Park. The two-day, free event, presented by the Coronado Historical Association, includes music and interactive art activities for children and adults. Artists will be in place from 10 a.m. to 5 p.m. Saturday and Sunday at the Coronado Ferry Landing.

Coronado MainStreet, the Coronado Chamber of Commerce and Fleet Week will preview the Coronado Speed Festival with a race-car procession from North Island Naval Air Station, down Orange Avenue to Isabella Avenue. That’s where drivers will park their race cars and share their stories with the public. Free. The parade begins at approximately 3:30 p.m. with cars “in place” at approximately 4 p.m. 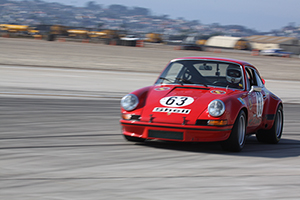 “The Race at the Base” will again feature vintage auto racing, complete with Trans-Ams, Porches and historic NASCAR entries. This year, the event will celebrate the 50th anniversary of the Porsche 911 with more than 200 Porsches on display and an honorary lap around the track, courtesy of the Porsche Club of San Diego in the Car Club Corral.

All active duty, active reserve and their direct-dependent military ID holders will receive free admission. For the public, tickets are $25, one day, $35, both days, in advance, or an additional $10 at the venue.

Organized by the Coronado Real Estate Association to benefit PAWS of Coronado. Pets will win prizes for Most Handsome Male, Prettiest Female, Most Gorgeous Senior (12 years and older), Most Beautiful Rescue or Best Costume. It’s $10 to register your pet onsite (11:30 a.m. to 12:45 p.m.). A panel of judges will select “The Best Chili of the Year.”

Coronado School of the Arts starts off the year with this fundraiser that combines a catered feast of Mexican food with entertainment by CoSA student artists, including singers, dancers, musicians, and visual and digital artists (CoSA’s technical theater students run the show.)

Wednesday, Oct. 16 A Taste of Coronado

At the Coronado Library

Talented pianists will perform free recitals on
the library’s Steinway piano every Friday from 12:30 to 1:30 p.m., Winn Room.

Through Oct. 11 Exhibit: Glimpses of Glamour: The Photographs of Classic Hollywood

In the Exhibit Gallery.

(Unless otherwise specified, all events are for 6th–12th graders and are held on Wednesdays at 2:30 p.m. in the Ruby Room).

Monday, Oct. 7  Game time. We provide Wii and Xbox consoles, teens bring their own games to play with friends or play those at the library. Board games and other activities will be available. This event is limited to high schoolers. 4 p.m., Winn Room

FALL PROGRAMS FOR CHILDREN AND TWEENS

The popular annual carnival and haunted house at the Coronado Community Center is presented by the Coronado Recreation Department. Whole family hours, 3:30 to 5:30 p.m.; 6th graders to adults, 7 to 9 p.m.

The Coronado Library presents a children’s Halloween party including carnival games, costume contest and kid’s concert from 6 to 8 p.m. The happy haunts will take over the main lobby, the Ruby Room, the children’s patio and the children’s library. Concert will be held in the Winn Room. (619) 522-7390

Get in the Halloween spirit with Coronado School of the Arts and movies that are creepy, crawly, spooky and suspenseful. (Not recommended for young children). In the CHS Main Stage theater.

Kids can dress up and go safely trick-or-treating with their parents along Orange Avenue (and its tributary streets) from 3:30 to 5:30 p.m. Merchants will have the candy waiting! Presented by Coronado MainStreet (619) 437-0254

A world premiere comedy by Samuel D. Hunter, hailed by the Los Angeles Times as a “Face to Watch in 2013.” In a small northern Idaho town, QZ keeps her struggling newspaper going by running personal ads from lovelorn long-haul truckers. When her publisher and former lover returns, QZ’s romantic life jackknifes sharper than a runaway 18-wheeler on the I-90. A funny and bighearted play about our longing for connection and the barriers we place in our way. Directed by David McCallum.

That light in yonder window is still the east and Juliet is still the sun…but the sound in her bedchamber is all new: the sweeping, emotional and extraordinarily beautiful songs of the late rock icon Jeff Buckley.

A trio of friends, on a road trip of a lifetime, who hop aboard a battered old bus searching for love and friendship in the middle of the Australian Outback and end up finding more than they could ever have dreamed.

With sequestration, military planes won’t fly, but spectators can get up close and personal to ground displays of Marine equipment and aircraft. There will be several civilian flight demonstrations, including the Patriots jet team.

Tickets: price to be announced; www.miramarairshow.com 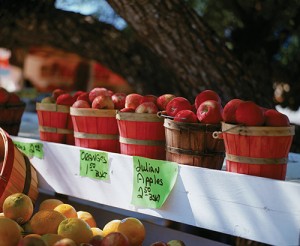 When the weather grows a bit cool and crisp, it’s time to head for San Diego County’s eastern mountains and some of the nation’s best apple pies. The Apple Days celebration, held at Menghini Winery, is planned by the Julian Merchants Association, a community group representing more than 90 merchants in the greater Julian area, including Julian, Wynola and Santa Ysabel.

The event features apple displays, music and dancing, an antique tractor display, children’s games and activities, gold panning demonstrations, a beer and wine garden, food and merchandise vendors, contests, and, of course, apple pie. 10 a.m. to 5 p.m., both days. Menghini Winery is at the end of Farmer Road, about two miles from the center of town.