Local contractors bring years of experience and expertise to their jobs

Meet Eric Gillem and Kirk Mullin — two builders, one homegrown in Coronado, another who made his way to our shores via the desert. Both have unbridled passion and pride in their work that shows in the final results. 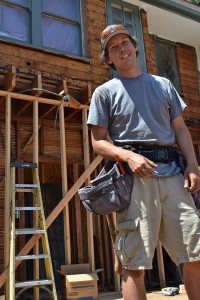 Eric Gillem, owner of Crown Peninsula, Inc., packs a lot of construction background and expertise into his 28 years.

Gillem has had his contractor’s license for three years but has been managing projects since 2008, including a Mills Act home on Monterey Avenue.

“I’ve been surrounded by building my whole life,” said Gillem, who has worked for short stints for his father’s construction company and after high school (CHS, class of ’03) for Dave Parra Construction, often working on Mitchell’s projects.

Even now as he drives around Coronado, Gillem can look at a fair number of homes and say, “I had a hand in building that.”

After purchasing a Mount Helix home in a short sale, Gillem has been singlehandedly rehabbing the four-bedroom, two-bath property, one room at a time. “It’s pretty much a complete gut,” he said. “If I weren’t single, I probably wouldn’t be living there while I’m doing it.”

He’s also pouring about $100,000 of materials into the house, including new siding, new stucco and architectural woodwork in the entry, and for drought-tolerant landscaping on the 12,000-square-foot lot. His plan is to rent the home to a family as an investment. It’s one step to eventually bring him back to Coronado. “I’m so appreciative that I went through our school system here, participated in Little League, had all these great teachers and coaches,” Gillem said. “Yeah, I’d like to eventually settle here.”

Gillem has always gravitated toward science and first thought he’d like to major in aerospace engineering. “I liked the idea of designing and building planes and rockets. But I realized I’d be spending much of my time in a lab, and I like being outdoors. I made the right decision; especially now that NASA is dropping all of its programs.”

He finds that science has some crossover into his role as a general contractor.

“Making a home last is really all about physics,” he said. “It’s about keeping water out, installing air barriers and proper installation so you don’t have drafts. California has the highest rates of callbacks of any state on moisture problems because many contractors don’t pay attention to it. We’ve got mild weather most of the time, but if you have a storm you can get mold or rot.”

He cites an example that now is coming into code. “Many builders aren’t waterproofing windows properly. When you tear up houses, you’ll often see water damage under windows. Builders used to use black paper (an asphalt-based product that falls apart with time) but now white Dupont Tyvek material (similar to a water-resistant postal envelop) is a better choice,” he advised. “Plus, if you slope the window seal just a degree or two, any water that gets in will seep to the outside instead of into the wall.”

Working with Kate Gillingham, a broker with Coronado Island Realty and a fellow CHS grad, Gillem rehabbed a two-bedroom condo in San Diego that Gillingham’s client then turned for a tidy profit.

and created a new kitchen with granite countertops, a ceramic subway tile backsplash, a soapstone sink and an island. A large laundry room was remodeled into a smaller laundry room (with stackers), allowing space for a powder room. 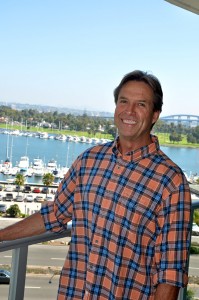 Kirk Mullen is Coronado’s high-rise specialist. A resident of Coronado Shores since 2005, Mullen has been building there since 2002. But his career in construction goes back 30 years, including years in the Palm Springs area, where he grew up. Mullen learned the building trade from his grandfather who had a cabinet shop. “I had a paper route in fourth grade; I’d sell my papers and buy a band saw.”

In high school woodshop, Mullen built a grandfather clock and entered it into the Date Festival competition in Indio. “When my teacher saw that I hadn’t been given a ribbon, he had a chat with the judges. They didn’t believe I made it; they thought it was must have been from a kit. He set them right, and they gave me first place. I gave the clock to my mom that Mother’s Day.”

Much of his desert work was in the PGA West golf course community, where he specialized in custom cabinetry. “Many of those residents had second homes along the coast, so I began working here.”

Mullen and his family moved to Minnesota for several years, preferring a Midwest school upbringing for his two children. But even while living in Minnesota, Mullen’s client base continued to be largely on the West Coast. His clients were willing to fly him out to measure spaces and incur freight charges for his products. After his kids were grown, Mullen moved to Coronado.

Phyllis Maas and her husband, Dr. Harry Maas (who died in 2008) were his first Shores’ clients. At their Las Flores condo, Mullen remodeled the couple’s den and TV area, then kitchen and living room, and eventually the entire three-bedroom unit.

One of his latest projects at the Shores is at La Princesa Tower. A two-bedroom unit with a central living/kitchen area  now features a vast vista of glass and an “Oh Wow!” view of Glorietta Bay and the San Diego skyline.

“We gutted the entire unit and hauled out eight tons of debris,” Mullen said. “Nothing was left but four pillars (housing plumbing and electrical). From that point, he extended the space out to the former patio and created a vast expanse of glass that runs the entire length of the unit – even walls between the living area and bedrooms are glass (blinds can be automatically lowered for privacy).

“It’s all about the view,” Mullen emphasized. “We wanted to open it up, so that you feel like you’re outside.”

But while the view is a central consideration in high-rises, Mullen also pays attention to clean and contemporary lines in cabinetry and appliances. At the Princessa unit, he opened up the kitchen, installed granite counters with stainless-steel pulls that he crafted in his El Cajon workshop. He used East Indian rosewood on appliance facings and cabinetry in the kitchen, on the TV console and a desk/bar combo that looks out over the water.

“I love working with stone and glass and natural materials…and lighting,” said Mullen. “Lighting, especially, is so important and people often overlook it.” Much of his custom furniture and cabinetry, crafted in his workshop in El Cajon, incorporates lighting into the design. “It definitely can create a mood,” he said. 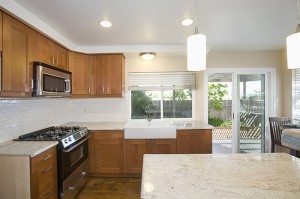 Gillem helped create a quick sale of this San Diego condo when he outfitted it with a new kitchen, complete with granite countertops, ceramic subway tile backsplash, soapstone sink and a new island. 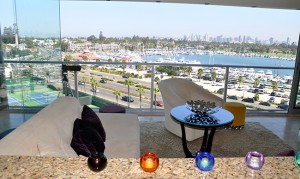 “It’s all about the view,” said Kirk Mullen, who installed Fleetwood sliding glass doors along the entire expanse of the Coronado Shores unit. 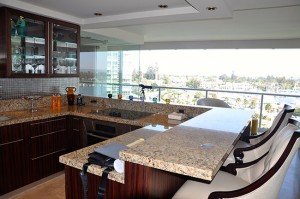 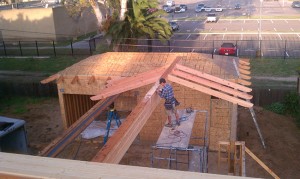 Eric Gillem on a jobsite 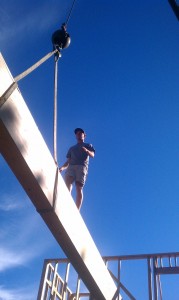 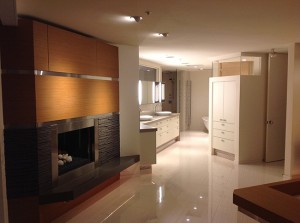 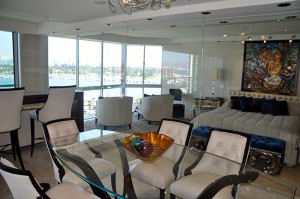