Patty Jepson’s first trip to India — but surely not her last, she attests — was the subject of the September “Armchair Travel” lecture series, a new offering for all ages at the Coronado Senior Center.
The travel series features Coronadans who share their worldwide adventures. Recent lectures, mixing tourism, history and culture, have included Thailand, Tanzania and Cambodia.
The program was the brainchild of Helen Anderson, who has lived for long periods of time in Hong Kong, Taiwan, Singapore and other Asian cities, and who, for many years, organized the San Diego Museum of Art’s tours to museums in Asia.
“Namaste,” said Jepson, greeting the roomful of Coronadans who came to hear of her travels to northern India last March. “That’s the Indian greeting that means ‘I welcome you, and I acknowledge your soul within you.’”
Jepson is the daughter of John Murphy, who served as the first commander of the Naval Amphibious Base Coronado. She lived in China through age 5, when her father was part of the Yangtze Patrol, shortly after World War II. A graduate of Coronado High School, Jepson also lived for stints in Italy and Seattle before returning permanently to Coronado in 1989. But, until recently, she had never ventured to the land that the British dubbed “the Jewel in the Crown.”
“India is so large that it is referred to as a subcontinent,” Jepson said. “Marco Polo came along the Silk Road, then the Arabs came by sea and lastly the British came and stayed some 300 years, leaving their imprint on the culture.”
Indians, Jepson said, are devoutly religious. “Regardless of whether they are Hindu or Buddhist, they worship the mountains, which they call ‘the hills,’ they worship rivers, trees and certain animals — that’s where we got the expression ‘Holy Cow!’”
Jepson’s tour group gathered in the capital of India, New Delhi, which she described as flat, dry and with little vegetation or water, “and lots of open space, which becomes flooded during the monsoons.” The group traveled by private motorcoach to Agra, where it toured the Taj Mahal and other ancient ruins.
In Jaipur, the largest city and capital of Rajasthan, also known as “the pink city,” Jepson found “fabulous markets that stretched for blocks.” (Other cities in India, Anderson later added, are known for their architectural colors: Jodphur, the pale blue city; Udaipur, the white city; Jaisalmer, the golden city; and Bikaner, the red city in the north.)
At daybreak, which Jepson said is considered the most holy time, the group had its first glimpse of the Ganges River, which she described as one of the most emotional things she had ever experienced. “It was spectacular, with priests on platforms, chanting and praying.
“There are thousands of people going into the river, cleaning themselves, washing away their sins. It’s a very religious ritual, often practiced several times a day. (The group went back several times.) And yet there are no children in the Ganges. Children are considered pure.”
The tour group flew to Nepal and its capital, Kathmandu. “I felt like I was in Tibet,” Jepson said. “It was very Chinese with lots of Buddhist temples — huge temples with big bells.” The food, too, she noted, was a mixture of Chinese-Indian.
Jepson found the Buddhists to be very friendly and sociable. “Many are tourists themselves. They were always taking lots of pictures with cameras and iPads.”
At the conclusion of her talk, Jepson shared the price tag of the 18-day tour. “I’m a frugal shopper when it comes to travel,” Jepson said, noting that the trip, booked through Smart Tours, was about half of what most comparable tours cost. At $1,500 (double occupancy; Jepson traveled with her good friend Joetta Ragland, a resident of Coronado Cays), the trip included round-trip airfare from New York to New Delhi, all accommodations, daily breakfast buffets and a few dinners, luggage transfers and ground transportation. “All our hotels were on the water with swimming pools and meeting rooms,” Jepson said. “You could probably find a more glamorous hotel, but these were top-flight with very accommodating staffs.
“I can’t wait to go back,” she said. “And my next trip will be to southern India.”
Each talk is preceded with a happy hour featuring taste treats representative of the country featured in the lecture. The presentations are held on the second Thursday of each month except for December and are free, but donations are requested for the food.
“These talks have really been a win-win,” Anderson said. “They allow the traveler to share their adventures with people who might not be able to travel. Or maybe they think they can’t, but when they hear these talks, they realize they can!”
Upcoming Armchair Travel Lectures
Happy hour with tastes of the country: 5:15 p.m. (Donations requested)
Lecture: 6 p.m. (Free)
Call the Coronado Senior Center at (619) 435-2616 for updated information.
Nov. 14 Mongolia presented by Lonnie Horn
Jan. 9 Sailing ’round the world presented by Wes and Charlotte Harris
Feb. 13  China presented by Helen Anderson and coinciding with the Chinese New Year

The white marble Taj Mahal was built by Mughal emperor Shah Jahan in memory of his third wife, Mumtaz Mahal, “his favorite wife,” said Jepson, noting both Mumtaz and the Shah are buried inside. “It’s hard to believe anything is so large and so white.” 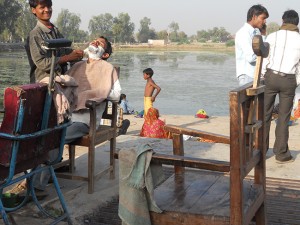 “If you don’t like crowds, I don’t think India is the place for you,” Jepson cautioned. “Privacy is not in their dictionary. Everything is out in the open, like this man getting a shave.” 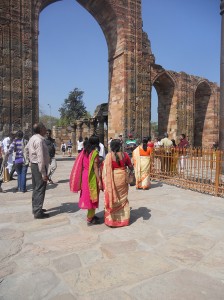 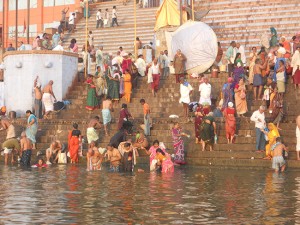 The Ganges may be one of the most polluted rivers in the world, but it still is the river of choice of Hindus who bathe in its waters several times daily to wash away spiritual sins. 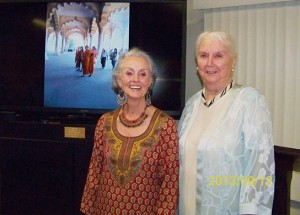 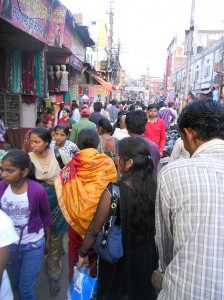 Colorful shopping bazaars abound throughout Jaipur. “Have a sari or two!” Jepson suggests, who wore one at her lecture. “Pick your color. You can wear it or just cover a bed or a table with it.”