Coronado Unified School District (CUSD) is repeatedly regarded as one of the best, if not the best, school districts in San Diego County. Over the years, CUSD has earned this reputation, demonstrated through its high Academic Performance Index (API) scores, through the hard work of its teachers, students, parents, school staff, the Coronado Schools Foundation, the CUSD School Board, and community members.

However, with new government funding programs in place, 2014 is shaping up to be a year that demands hard choices that will affect the district for years to come. According to a concerned Superintendent Dr. Jeff Felix, Sacramento has spoken, and now “We must change how the district has done business over the last 40 years.”

Since the early 1980s, after Proposi­tion 13 changed the rules for raising taxes locally, California public schools have been funded predominantly with funds allocated each year from the state. Property taxes are not kept locally; rather, they go to the state, and the state then funnels some of those dollars, as well as some dollars raised through sales and income taxes, back to local governments, including school districts. Some districts, including CUSD, also historically received federal funds known as “Impact Aid” due to the large amount of military land and high number of military personnel within the district. Each district then made its own decisions as to how to use its funds to implement its programs. (CUSD devoted a fair portion of its funds to build some modest reserves.)

For most of the last 35 years, the state funds provided to school districts have been determined through a formula that multiplied a set monetary amount per student by the district’s average daily attendance (ADA), which meant Coronado lost money when kids called in sick or missed school for vacation. The funding amount per ADA was about the same across the state, though there were some minor adjustments made for poorer districts.

Then, five years ago, the state ran into the recession. As state revenues nose-dived, so did allocations to school districts.

The CUSD school board reacted with a series of budget cuts, including increased class sizes, furlough days, pay cuts and program cuts. The school district forecast at least a five-year recession, and it made the decision to apportion its reserves over the five years to avoid dramatic cuts. In other words, the district planned for moderate deficit spending for five years, but it only did so after material cuts, and with discipline and in moderation. “We cut up front,” said Felix, “and our employee groups pitched in and accepted furloughs and pay cuts.”

This fiscal prudence, combined with some unanticipated one-year federal and state funding awards permitted the district to sustain most of its programs and to maintain a portion of its reserves, notwithstanding the recession.

However, one-year funding awards are just that — they run out after a year. When the year is over, the options remaining are to cut expenses, find other revenue or accept a structural deficit. With sequester mania clutching state and federal governments, further one-year awards are unlikely. Even CUSD’s historic military Impact Aid is scheduled to be cut.

The effects of the recession, as outlined by the CUSD Budget Facts Sheet, are as follows: The state has cut $2.1 million in real annual funding relative to the 2007-’08 school year. The state has also cut funds amounting to another $3.2 million per school year that were promised to cover cost-of-living increases, i.e., personnel, supplies, light bulbs or electrical bills. In sum, these cuts have left a gap of about $5.3 million per year for a district with a total annual budget of around $28 million. It also adds up to $1,780 less in spending per student per year, relative to the 2007-’08 year. Though the district has covered some of this gap with spending cuts, CUSD is still left with a structural deficit of about $3 million per year. 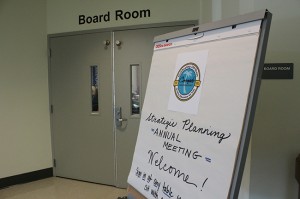 This is why Superintendent Felix and the school board must make more tough calls this year. While many organizations and school districts planned for a shorter-term recession, “We planned for a five-year recession,” Felix said. “We thought we were doing the right thing by adopting some tough cuts but also prudently drawing on reserves to glide to a soft landing over five years. We figured that the recession could not last forever.”

The facts have shown that Felix was right — the state economy has shown a gradual rebound and state revenues have increased. Assuming that the state had returned to its historic funding formula, CUSD was positioned to see its revenues recover, which in turn would have eliminated the structural deficit and perhaps even permitted re-instatement of some of the previous cuts.

But then, as Felix notes, “Right when we were set to win, Sacramento changed the rules, and Coronado’s schools lost.”

Felix is referring to the Local Control Funding Formula (LCFF). In Coronado’s case, Felix finds the policy title ironic, at best, for in CUSD’s case he believes “We are losing local control, not gaining.” The LCFF is the centerpiece of a law Gov. Jerry Brown signed into law in July to direct funds to districts where he believes “the need and the challenge is greatest,” reported EdSource, an education-focused think tank.

Felix’s disappointment with the new policy is palpable – not because he doesn’t see value in it for other districts, but because he believes it isn’t fair for Coronado.

Felix’s view is rooted in his understanding of how the state funds from this new program will be handed out. Funding will be given to districts, not schools, and the funds will be called Base Grants. A Base Grant is a lump sum a district receives for every student in a district. The program is designed so the Base Grant will increase each year.

This all appears to be fair and somewhat similar to the historical funding formula. The catch that hurts Coronado, however, according to Felix, is in the Concentration Grants. These are state grants that will supplement the Base Grants, which will go to schools “based on the number of high-needs students enrolled in the district. High needs students are mostly low-income students and English learners. So, while Felix notes that the LCFF may be a valuable tool to improve California’s poorer schools, it will cause the funding for Coronado’s schools to be decimated due to Coronado’s demographics and socioeconomic make-up.

Plain and simple, under LCFF, Coronado schools won’t receive the same amount of money they used to receive. Felix said, “CUSD made sound fiscal decisions up to this point, but in 2012 we elected a super majority in Sacramento, and that action paved the way for LCFF, a program based on demographics and English learners who are more expensive to instruct. It’s that simple.”

This formula is “the most significant change in California’s funding system for K-12 schools in four decades,” according to EdSource.

According to the CUSD Budget Fact Sheet: the district got a bump in Average Daily Attendance money this year compared to last. The ADA increase was $247 per student for a total of $6,225. But the challenge lies in what happens to CUSD’s competitive edge when it receives less overall funding than nearby districts. San Diego Unified School District, for example, will receive $7,300 in ADA money, more than $1,000 more per student than CUSD. In ADA ranking, CUSD is now ranked 11th of the 12 unified districts in San Diego County.

Felix and the CUSD school board are now faced with the task of figuring out how to keep Coronado schools moving forward, and doing so at the high quality level that the community has grown to expect. One concern is the district’s ability to attract and retain high quality teachers when pay rates are likely to rise across the bay. Increased class sizes and fewer paid instructional days may be a reality, both of which are likely to impact annual student test scores.

In short, options are to make extensive cuts, consequently affecting the strength of the school system, or find new revenue streams. According to Felix, both are required.

Editor’s Note: At the close of the Dec. 12 strategic planning meeting, the school board unanimously voted to adopt a resolution promising close to $3 million in permanent, ongoing cuts for the next school year and another $1.5 million in similar cuts for the 2015-16 school year. The resolution was necessary to avoid punitive action from state administrators that might eventually lead to a complete loss of local control.

Whitney Benzian (CHS Class of ‘98) is a freelance writer and Realtor with Willis Allen Real Estate in Coronado. 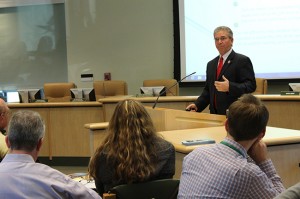 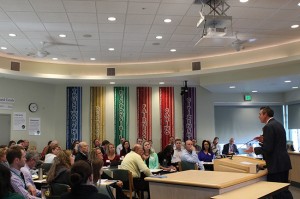 Keith Butler, assistant superintendent for business services, fielded questions from the audience about the current and future financial state of CUSD. The district’s six ‘Pillars of Character’ — trustworthiness, respect, responsibility, fairness, caring and citizenship — hang in the background.