Theater
Lamb’s Players Theatre presents:
Jan. 10–Feb. 2 Fiddler on the Roof
After the wild success of its Coronado Resident Stage run, Lamb’s has lined up an encore performance of Fiddler on the Roof at downtown’s Lyceum Theatre. The tale of Tevye the milkman and his daughters from the popular stories of Sholem Aleichem became one of the world’s greatest musicals. This fresh, stirring and joyous production draws on the fascinating musical tradition of the Klezmer band, with powerful dance numbers and an amazing cast of actor-singer-dancers. In the Lyceum Stage theater, 79 Horton Plz., downtown San Diego. (619) 544-1000 or www.lambsplayers.org

Jan. 24–March 2 The Foreigner
Shy Englishman Charlie Barker finds himself in a rural Georgia fishing lodge where everyone comes to believe he doesn’t speak English. Lamb’s most requested comedy. In the Coronado Resident Stage theater, 1142 Orange Ave.  (619) 437-6000 or www.lambsplayers.org

Coronado Playhouse presents:
Jan. 17–Feb. 23 Chicago
In Roaring ‘20s Chicago, Roxie Hart murders a faithless lover and convinces her husband, Amos, to take the rap…until he finds out he’s been duped and turns on Roxie. Convicted and sent to death row, Roxie and another “Merry Murderess,” Velma Kelly, vie for the spotlight and the headlines, ultimately joining forces in search of the “American Dream”: fame, fortune and acquittal. This sharp-edged satire features a dazzling score that sparked immortal staging by Bob Fosse. Chicago won six Tony Awards including Best Revival and later the Academy Award as Best Picture of the Year. It’s the longest-running American musical in history. At the Coronado Community Center theater.  (619) 435-4856 or www.coronadoplayhouse.com

Coronado School of the Arts  presents:
Jan. 31–Feb. 8 The Complete Works of William Shakespeare abridged
Whether you’ve read them, studied them, or seen the plays and movies, the stories written by history’s playwright extraordinaire are near and dear to so many hearts. Enjoy a medley of Shakespeare’s finest plays, honed to their essence and artfully produced by award-winning director Kim Strassburger. In the CoSA Mainstage Theater on the CHS campus.

Thursday, Feb. 27 and Friday, Feb. 28 Digital Media Expo
Experience an incredible world of digital art and interactive media, including movies, photography, animation and live demos of the state-of-the-art equipment students use in their creations. In the CoSA Black Box Theater on the CHS campus.
650 D Ave. (619) 522-4050 or  www.cosasandiego.com
COMMUNITY EVENTS
Sunday, Feb. 16 Coronado Valentine’s Day 10k &  1 Mile Fun Run
Whether you are looking for a new 10K personal record, some prize money ($3,000 prize purse), or you just want a great flat course through beautiful Coronado, the fourth annual Coronado Valentine’s 10k is a great way to start a day of romance — you can even register as a couple! This event will sell out, so register early and enjoy a beautiful run along the bay and a festive post race party. All proceeds benefit the Islander Sports Foundation and the Stephen J.  Wampler Foundation. www.coronado10k.com

Feb. 21–23 Nations of San Diego: International  Dance Festival
From a brilliant tango to a Bollywood extravaganza, Nations will showcase more than 30 dance traditions with over 300 dancers and musicians. Go on a journey full of the music, movement and beauty of the world right here in Coronado. 650 D Ave.  (619) 522-6202 or www.nationsdancefestival.com

Feb. 14 International Passport: TAO:  Taiko Drummers of Japan
Back by popular demand, the awesome power and spectacle of an ancient Japanese drumming tradition returns to San Diego. TAO’s explosive energy, extraordinary precision and vibrantly modern take on this traditional art form will have you jumping out of your seat. San Diego Symphony does not appear.

La Jolla Playhouse presents:
Feb. 11–March 9 The Who & The What
Raised in a conservative Muslim family in Atlanta, the outspoken and brilliant Zarina routinely clashes with her traditional father and sister. Zarina’s one outlet — her recently completed book about women and Islam — threatens to tear her family apart for good. With humor and ferocity, Ayad Akhtar’s The Who & The What examines the giant chasm between our traditions and our contemporary lives.
2910 La Jolla Village Dr., San Diego. (858) 550-1010 or www.lajollaplayhouse.org

The Old Globe presents:
Jan. 25–Feb. 23 Bethany
Crystal and Gary live in a nice home in the suburbs. Only it’s not theirs. In fact, they didn’t know each other before they moved in — they’re squatting in a foreclosed house. Now Crystal’s got a plan to get her life back on track. Laura Marks’ powerful new drama will take you on the ride of your life with a woman willing to take on anything and everything… all for someone named Bethany. Contains strong language.

San Diego Opera presents:
Jan. 25, 28, 31 & Feb. 2 Pagliacci
“Crazed clown murders wife in front of live audience” is what the headlines would have screamed after the jealous Canio stabs to death his wife, Nedda, and her lover in a jealousy-driven rage while performing a comedy before an audience of shocked Italian villagers. One of the most powerful operas, Pagliacci is gut-wrenching as Tonio, a member of the traveling troupe of players rejected by Nedda, sees her with another man and tells Canio how to get vengeance.

Feb. 15, 18, 21 & 23 The Elixir of Love
Is it a magic elixir or just a bottle of cheap Bordeaux? Nemorino desperately wants to marry the wealthy and out-of-his-league Adina and turns to an “elixir of love” in hope of winning her, spends all his money, and has to enlist to get cash for more. When the quack doctor tells the village girls that Nemorino is suddenly rich, they all chase after him. It’s a romantic comedy of Hollywood proportions.
San Diego Civic Theatre, 1100 B St., San Diego  (619) 533-7000 or www.sdopera.com

Jan. 7–12 Disney’s Beauty and the Beast
Based on the Academy Award-winning animated feature film, Disney’s Beauty and the Beast is an eye-popping spectacle that has won the hearts of more than 35 million people worldwide. This classic musical love story is filled with unforgettable characters, lavish sets and costumes, and dazzling production numbers including Be Our Guest and the beloved title song.
San Diego Civic Theatre, 1100 B St., San Diego (619) 564-3000 or www.broadwaysd.com 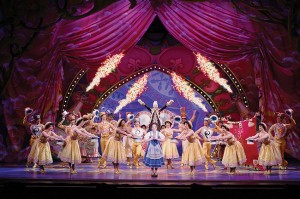 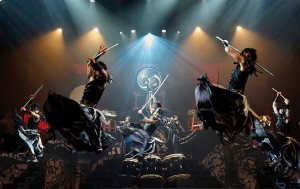 Jan. 7–12 Hilary Maiberger as Belle with the cast of Beauty and the Beast at Broadway

The 20th anniversary of Nations of San Diego International Dance Festival will explode onto the Coronado Performing Arts Center stage from Friday, Feb. 21 to Sunday, Feb. 23 with a record-breaking kaleidoscope of color, rhythm, and movement, bringing together diverse cultural traditions rarely seen in one setting. In honor of the 20th anniversary, 31 dance companies (far eclipsing last year’s 19 troupes) with more than 300 dancers and musicians will delight audiences in a series of five shows, each show featuring a myriad of performances from around the globe. San Diego is a diverse melting pot of many fascinating cultures, all of which have their own community festivals and performances, noted Kris McClung, founder of the Coronado School of the Arts. “When they are brought together under one roof, it truly showcases the cultural splendor that San Diego has to offer,” McClung said. “Nations’ dancers and musicians are among the best practitioners of their art forms in the world. Many have won awards in their nations of origin and have trained with the best in their fields. This is world-class art and Coronado is proud to host such an event.” The Nations festival has come a long way since its conception in 1993. Betzi Roe, CoSA Dance Division Chair, was president of the San Diego Dance Alliance at that time and oversaw the creation of the festival in partnership with the San Diego Repertory Theater. Its inaugural performance was at the Lyceum Theatre that year. In 2006, the San Diego Dance Alliance went out of business and the CoSA Foundation took over sponsorship of the festival. With local support from the Coronado Tourism Improvement District, the foundation has helped it grow and thrive since. Roe serves as the artistic director and the CoSA Tech Department produces the technical aspects of the show.