It’s been a huge year for the San Diego Symphony, including its debut at Carnegie Hall before a sold-out audience on Oct. 29.

Coronado resident Steve Baker, who serves as the symphony’s vice president of marketing, communications and audience services, facilitated the rite of passage for San Diego’s symphony, now rated as one of the top 10 orchestras in the nation. Baker worked at Carnegie Hall earlier in his career and made the initial contact with his former employer on behalf of the symphony. He then promoted and marketed the concert. His efforts were rewarded when, at 1:43 on the afternoon of the Tuesday night concert, word came down of the sold-out status of the 2,804-seat Stern Auditorium. Some 500 San Diegans traveled to New York to join musical director Jahja Ling and superstar pianist Lang Lang in a program that included Rachmaninoff Piano Concerto #2, Prokofiev’s Fifth Symphony and British composer David Bruce’s Night Parade. For an encore, Lang Lang and the orchestra played a faintly exotic folk song that segued into “Happy Birthday,” played in honor of Irwin Jacobs, the symphony’s $120 million benefactor, who turned 80 just prior to the concert.

The New York Times enthusiastically reviewed the debut concert, noting that in the Rachmaninoff concerto, “Mr. Ling was as much an enabler as an accompanist to Mr. Lang, who, true to form, played with dazzling technique, myriad colorings, bold impetuosity and exaggerated expressivity, milking melodic lines and manipulating dynamics for dramatic effect. But there is something authentic about Mr. Lang’s liberties, and his pianism is stunning. The audience gave him a long, standing ovation.”

The next morning the orchestra boarded a 14-hour flight to China for a 10-day “Friendship Tour” of Shanghai, Yantia (San Diego’s sister city) and Beijing, featuring two-thirds of the Carnegie Hall repertoire and violinists Joshua Bell and Augustin Hadelich performing Barber’s Violin Concerto on different legs of the tour.

Baker, who serves as vice chairman of the Coronado Cultural Arts Commission, was also pivotal in the planning of the China tour. 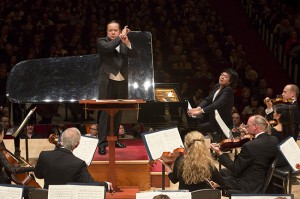 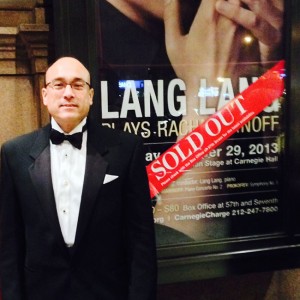