Through March 9 The Foreigner

A well-crafted quilt needs a skilled hand, a hopeful spirit and an eye for the order of things. This gem of a musical celebrates the extraordinary yet everyday pioneer women who helped settle America’s West.

Based on the original 1899 play by William Gillette and Sir Arthur Conan Doyle, temptation proves too much for Sherlock Holmes when a seeming “last case” presents itself. Holmes and Watson jump in to pursue the case and end up marching into the lair of longtime adversary Professor Moriarty.

Coronado School of the Arts presents:

In an attempt to patch up an ill-timed break-up with her boyfriend, Elle, a ditzy and naïve sorority girl, uses her beauty and brains to follow him to Harvard Law School. But when she gets involved in a legal case, she realizes that law may be more than just a boy-ploy. Full of heart, laughs, and hot pink, the musical is sure to leave the audience grinning.

For the third year, the Connect-A-Thon will be produced by students for students in this project-based learning live TV show. Under the direction of Amy Steward, Tony Perri, and Patrick Galligan, student teams from both the CMS KCMS News Team and the CHS KCHS-TV News Team will direct, tape and edit all pre-taped acts and produce the show. Principals and assistant principals will be joined by CHS seniors to host the event. Quad gates open at 5 p.m. Dinner is available at the CHS Senior Class Food Court along with activities for kids of all ages (for a nominal donation). The show can be viewed live 5:30-8:30 p.m. (phone bank is open 5-9 p.m.) via CTV Channel 19 in Coronado, iTV cable Channel 16 across San Diego County, and with online streaming globally at www.csfkids.org.

Join many of the city’s former Miss Coronados for a pre-pageant reception in the foyer, then watch as winners are crowned in the categories of Petite, Young, Mrs., Teen, Little Miss and Mr., and of course, the selection of the new reigning Miss Coronado. The pageant is now an official preliminary for Miss California USA, so contestants will participate in an interview as well as swimsuit, evening gown, and onstage question competitions.

From Chopin to Coltrane, from piano to electric bass, with some saxophone thrown in for good measure. CoSA’s Instrumental Music recitals feature a wide variety of musical styles and

Join fellow golfers for a day on the links at Coronado Municipal Golf Course. Player fee is $200 and includes green fees, barbecue luncheon, buffet dinner, goody bags and prizes, and helps the Coronado Rotary Club give to numerous community and international programs.

The USS Coronado (LCS-4) is an Independence-class littoral combat ship and will be the third ship of the U.S. Navy to be named after Coronado. Tickets are free but mandatory to attend. You can request them at www.coronadocommissioning.net (See story, page 36)

All homefronts in Coronado are judged by two-person teams who walk the streets, block by block, and judge each home based on its own potential, not pitting neighbor against neighbor. Commercial businesses, churches and condominiums are also included in the judging. New this year: a People’s Choice award for Best Homefront; you can vote at www.coronadoflowershow.com.

As part of a unique collaboration taking place at museums all over San Diego showcasing the vast history of the U.S. military, Coronado Historical Association will host a new exhibit on the History of U.S. Navy SEALs in Coronado. Visitors will receive a “passport” granting access to all participating museums around the city where they can collect stamps marking the exhibits they’ve visited as part of the overall historical exhibit.

The 11th annual luncheon will be held at Coronado Island Marriott and include silent and live auctions. The inspiring program will honor this year’s legend and one of Coronado’s true local treasures, Ilene Swartz. (See story, page 46)

CoSA’s Visual Arts students’ portfolios will be assembled in a gallery showcase.

Browse one of the largest book sales in the country under tents directly adjacent to the Coronado Flower Show. Thousands of books, CDs and DVDs will be available and are usually marked at 25 percent of the original price. Event opens with a preview sale on Friday to Friends of the Library members only from 1 to 6 p.m. (memberships can be purchased at the door; prices to join available on website) and is open to the public from 9 a.m. to 5 p.m. on Saturday and Sunday. Special book pricing promotions will also be available on Sunday. 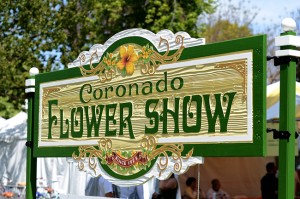 It’s not spring until the Coronado Flower Show has arrived. Taking up nearly an entire city block within tents surrounding the central gazebo at Spreckels Park on Orange Avenue, the flower show is a long-celebrated community event. Wander from tent to tent to see beautiful cut and arranged flowers, whimsical children’s creations, exotic plants, and more. You can even enjoy live music with a glass of beer or wine in the beer & wine garden. Admission is $5 for adults, free for children under 12 and Coronado Floral Association members.

Spring Fling: Flip-Flops and Florals, the flower show’s gala, will take over the Flower Show grounds on Saturday evening from 6:30-9:30 p.m. with live entertainment and food and wine tastings from Coronado restaurants.  Advanced tickets are $45 ($50 at the door).

Sunday, May 4 Motorcars on MainStreet

Isabella and Orange avenues take on the appearance of a bygone era with classic cars of various generations. Join thousands of

spectators to check out what’s under the hoods of more than 400 vehicles and enjoy live music.

The Great Gatsby takes over the Hotel del Coronado for the Foundation’s annual benefit black tie gala (Roaring ‘20s attire optional). Proceeds will fund the building of an outdoor garden space adjacent to the Sharp Coronado Hospital cafeteria. Tickets start at $250 per person.

Movies with the Mayor

At the Coronado Library:

The SilverWood Quartet will perform a variety of Irish music, including heartfelt airs, toe-tapping dances (reels, jigs, polkas) and songs by female and male voices. An extra highlight will be Irish step-dancers. 4 p.m.; Winn Room

Sunday, April 6 Paris in the Springtime

Concerts are free and are sponsored by The Friends of the Coronado Public Library.

Take a trip through the vast and delightful American songbook of George Gershwin with pianist Peter Nero, the Grammy Lifetime Achievement Award winner and Philly Pops conductor. Hailed as one of the premier interpreters of Gershwin and starring in the Emmy Award-winning NBC special S’Wonderful, S’Marvelous, S’Gershwin, prepare to be amazed as Nero brings the music of one of the most cherished and popular composers to life.

This genre-busting singing troupe straddles the worlds of pop and classical music. The four singers hail from four different nationalities, training, and sensibilities and have become an international sensation over the past decade. Tickets for this event are limited.

Through March 16 The Winter’s Tale

NPR calls Old Globe artistic director Barry Edelstein “one of the country’s leading Shakespeareans.” Now Edelstein’s work takes center stage in his Old Globe directorial debut with Shakespeare’s most enchanting masterpiece, featuring a powerful musical score written expressly for The Winter’s Tale by acclaimed classical composer Michael Torke. The Winter’s Tale sweeps breathtakingly from tragedy to comedy and along the way visits kings and queens, dancing shepherds, a most extraordinary statue, and one notoriously hungry bear before it reaches its stunning, magical conclusion.

March 29–May 4 Time and the Conways

The curtain rises on a gorgeous English country home in 1919. It’s a theatrical gem with the kind of sumptuous period scenery, costumes, and artistry for which The Old Globe is renowned.

April 12–May 11 Water by the Spoonful

Winner of the 2012 Pulitzer Prize for drama, this new play from Tony Award-winning playwright Quiara Alegría Hudes tells the story of Elliot Ortiz, who’s back in the states after serving in Iraq, reconnecting with family and starting a new life. Contains strong language.

Although the close relationship between Sweden’s King Gustav III and Amelia, wife of his best friend, Count Anckarström, has never crossed the line, jealousy and politics cause Anckarström to join a band of conspirators and ultimately to murder the king in front of his wife at a masked ball. As he dies, Gustav reveals the truth, and in operatic tradition, pardons Anckarström. Inspired by the real-life assassination of King Gustav III after which Anckarström was actually beheaded. A Masked Ball is powerful, threatening, dangerous and romantic.

The combined San Diego Opera Chorus and the San Diego Master Chorale will be the largest chorus San Diego Opera has ever assembled on the stage of the Civic Theatre. Italian conductor Massimo Zanetti conducts the San Diego Symphony in this concert work, which cries out for eternal rest, forgiveness and divine redemption. Sometimes called an opera disguised as sacred music, and written to honor the great Italian writer Manzoni, the Requiem will leave you breathless. There will be only one performance of the Requiem.

In the magical world of Don Quixote’s Spain, the eccentric knight pursues his impossible dream of capturing the heart of Dulcinea, his idealized woman, who sends him on a quest to recover her stolen necklace. With his loyal sidekick Sancho, he tilts at giant windmills, confronts bandits, and is nearly killed, but achieves his goal. However, when he returns with the prize, he is mocked, scorned and rejected. In one of the most emotional scenes in opera, the delirious Quixote dies believing he hears Dulcinea’s voice calling to him from a distant star. 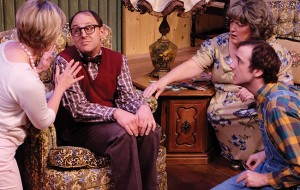 Through March 9 The Foreigner presented by Lamb’s Players Theatre

Dr. Art and Lesley Huffaker are co-chairs of this year’s Coronado Hospital Foundation gala, “The Great Gatsby.”  Save the Date:  Saturday, May 10 at Hotel del Coronado. 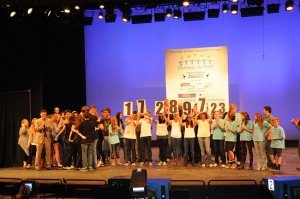 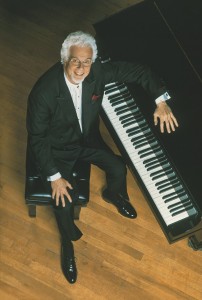