Coronado is about a year away from hosting its first film festival. While specific dates have yet to be nailed down, Coronado Island Film Festival’s (CIFF) executive director Doug St. Denis and director of business development Mary Sikes are confident that the stars are aligning to celebrate the movies on Coronado Island. 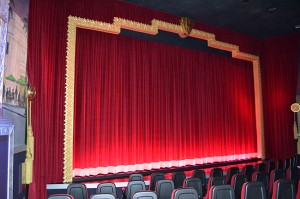 It’s only fitting that Coronado have its own film festival, St. Denis noted. “From its earliest years, Coronado has had a love affair with Hollywood and the making of movies.”

More than 100 films can trace their roots to the island. There was Some Like It Hot, of course, shot in 1958 at the Hotel del Coronado under the direction of the legendary director Billy Wilder and starring Marilyn Monroe, Tony Curtis and Jack Lemmon. The Del was also a filming site for The Stunt Man (1980) and My Blue Heaven (1990).

With the largest naval base on the West Coast of the United States in Coronado, such military films as Top Gun, GI Jane, The Hunt for Red October, Lone Survivor and dozens more all have elements of Coronado folded into their celluloid.

But movie cameras began rolling way back in 1888, when Hotel del Coronado’s owner John D. Spreckels embraced film to promote his island paradise. Tent City showed sunbathers basking on the beach, children playing on the hotel merry-go-round and vacationers sailing on the bay. Other movies depicted early Coronado, including Belles of the Beach (1902) and 1912’s The Maid and the Man, a comedy drama featuring the interiors and exteriors of the Hotel del Coronado. Mary Pickford made her way to Coronado to star in The Girl from Yesterday, a movie about a shipwreck filmed in 1915.

The idea of a film festival grew out of the city’s Cultural Arts Commission, which began meeting in January 2012, with St. Denis assigned to head up a committee entitled “Public Relations and Film.” She soon found that many members of the community interpreted “film” as “film festival” and signed onto her committee to bring that into being.

It quickly became apparent that a film festival was a massive undertaking, requiring substantial lead time and money to attract entries in such categories as feature films, student films, shorts and documentaries. (Categories have not yet been chosen for Coronado’s festival). Judges and guest speakers and perhaps an honored guest would need to be recruited.

CIFF is envisioned to include several locations such as the Village Theater, the high school theater, the Hotel del Coronado and Coronado Playhouse, chief among screening venues. But film festivals also include lectures, which could take place at the library Winn Room or Lamb’s Players Theatre. Non-judged films, typically family screenings, might occur on the beach, at Spreckels Park or overlooking the bay.

“We wanted to make sure we did ours right from the start, and it has been wonderful to see how people have been so willing to share information,” St. Denis said. “Because of the massive extent of the undertaking, we needed our own 501(c) 3 and a separate board. But we’re still under the warm umbrella of the city’s arts commission, because our mission is very similar.”

Knowing that film industry expertise would be essential, as well as a conduit to major studios, St. Denis and others recruited board members with experience in the film industry, including Jim Gallagher, a former president of marketing for Walt Disney Studios and St. Denis’ daughter, Terry Curtin, president of her own film consulting firm, whose career spans marketing positions with Twentieth Century Fox, Disney, Universal Studios, and Relativity Media. Lance Alspaugh, owner of Vintage Cinemas (and Coronado’s Village Theater) has signed on as a consultant to CIFF.

Paperwork was submitted to the state last July to form a nonprofit. “It was a huge amount of work,” said Sikes, who led the strategic planning for CIFF. “The system moves slowly, and we’ve been told final approval may take upward of a year.” While the process churns forward, CIFF is deemed a California nonprofit corporation in good standing, meaning all donations received by it one year prior to the IRS issuance of the exemption are considered tax deductible (donors are advised to confirm with their tax preparers).

Meanwhile, CIFF is off and running with a series of fundraisers that celebrate the art of movie making:

To introduce CIFF to the community, a kick-off reception was held in January at the Hotel del Coronado, hosted by the hotel’s new vice president and general manager, Andre Zotoff, who has joined the CIFF board of directors. In his welcoming remarks, Zotoff confessed that he has a bit of the aspiring actor in his genes, and even had a small part — as a hotel bellman, no less — in the 1997 movie Father’s Day, starring Billy Crystal and Robin Williams.

In February, CIFF held an Oscar Night at Nicky Rottens, where 16 overhead TV screens televised the Academy Awards. The sell-out event, which included guests’ arrival via red carpet amid paparazzi, raised more than $13,000 for the festival kitty; a second Oscar party for next year’s awards has been booked.

Next on the festival agenda are two screenings of movies with deep island roots:

On Thursday, May 22 CIFF will present a special screening of the 2012 American action film, Act of Valor, at the Village Theater with a pre-reception at Tent City/Museum of History and Art, with catering by Candela’s. The reception will introduce members of the Navy SEAL community who worked on the film, and George Galdorisi, co-author (with Dick Couch) of the novelization of Act of Valor, written after the February 2012 release of the movie.

Prior to the 8:30 p.m. screening of Act of Valor, CIFF will present the short film, U.S. Navy SEALs’ 50th Anniversary, written, directed and narrated by high school student Kyler Smith. His 17-minute film, which was his Eagle Scout project, tracks the history of the SEALs from 1962 to 2012. Tickets are $50, with a portion to be donated to the Navy SEAL Foundation. Tickets can be purchased at Coronado Bliss salon, the Coronado Visitor Center or online at www.coronadoislandfilmfest.com.

On Thursday, June 26, CIFF will host a screening of the 1959 comedy classic Some Like It Hot. A pre-reception at the Hotel del Coronado’s Coronet Room will include special guests and islander flashbacks of the movie’s filming in 1958 at Hotel del Coronado. Tickets, with prices still to be determined, can be purchased at Coronado Bliss salon or www.coronadoislandfilmfest.com.

And coming this August as part of the Oz Con festival, CIFF plans a special 3-D screening of The Wizard of Oz, which has been digitally remastered from its 1939 debut … some 75 years ago.  A reception will follow in the theater with special guest Aljean Harmetz, author of the book, Making of the Wizard of Oz.