In so many ways, Coronado is an insulated “island” community. Locals and visitors arrive via an iconic blue bridge and feel they are “away from it all.” But when it comes to the real estate market, just how insulated is Coronado? Our local real estate professionals weigh in on the state of Coronado’s home buying — and selling — industry.

Throughout San Diego County, the most notable market trend is low inventory and high demand, resulting in an increase in home values — in some cases to pre-recession levels — and shorter market times. Jim Nelson, a member of the “Team Riddle” real estate group at Lee Mather Company, explained how Coronado fares in the current market. “Like most major U.S. markets, Coronado is also experiencing limited inventory and increasing values. While this is pricing some homebuyers out of the market, it’s also helping the ‘move-up’ buyer who lost equity in the recession.”

According to Nelson, we’re also seeing an increase in the average list-to-sale price, meaning sellers who once got 94 to 95 percent of the list price are now commanding closer to 97 percent. “And,” said Nelson, “the high demand contributes to an uptick in inventory since homes that didn’t sell a year or two ago are now selling with some success.”

In the overall market this year compared to last, San Diego has seen a leveling off of home sales. But Leslie Kilpatrick, president of the Greater San Diego Association of Realtors and a Realtor with Willis Allen in Coronado, explained this isn’t necessarily a bad thing. “Last year, we saw an increase in inventory, which everyone was desperate for. But it did create a bit of a frenzy. We’re now hitting a sustainable equilibrium.”

Kilpatrick predicts that Coronado will outperform the overall market this year. “Coronado is not just a great place to live,” she said, “It’s a wonderful investment.”

Also a real estate agent with Willis Allen, Zach Todaro is a fourth-generation Coronadan and president of the Coronado Real Estate Association. He, too, finds that Coronado is an excellent investment opportunity for those who wish to invest over the long term.

He noted that Coronado’s housing price declines during the precipitous drop between 2008 and first quarter of 2010 weren’t nearly as severe as other areas of San Diego County. “We lost an average of 10 percent a year for that period,” Todaro said, “So our gains haven’t been as dramatic as some other areas of the county. In Downtown San Diego, for example, prices fell 40, 45 and even 50 percent off their peak. Therefore, they are experiencing steeper gains.”

Nelson said another reason for Coronado’s market stability is the substantial percentage of second homes on the island. “Owners of second homes generally have the financial wherewithal to weather a cycle of decreasing home prices,” he said. “So they provide a buffer against decreasing sales prices because the pressure to sell isn’t as strong.”

Carolyn Crane, broker and owner of Crestmont Property Management said that many second homeowners who waited out the downturn are now seizing the opportunity to sell. She noted that another reason Coronado did not see as drastic a decline in prices is because it has lower inventory and higher demand than the overall market. “Despite the economic downturn,” Crane said, “Coronado wasn’t hit as hard because it still had so many unique, desirable factors for those who were able to buy — size, location, good schools, and not as many traffic issues as other coastal areas like La Jolla.” 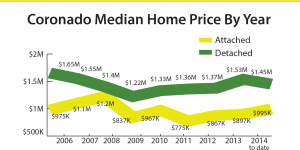 Dino Morabito, real estate agent with The Morabito Group at Real Living/Napolitano added, “When people buy a home in Coronado, they don’t want to sell because many people feel there’s nowhere better to go. Our price points here are just as competitive, if not more so, as other desirable coastal communities, but Coronado has a lifestyle that other places don’t always offer. People are at their most relaxed here — whether they’re here full or part time — and that’s a big draw.”

“For people who want to buy and hold for the long term, Coronado is great; it’s very stable,” Todaro said. “Odds are, even during the worst of the worst times, you’re hedging your bet if you buy in Coronado.” 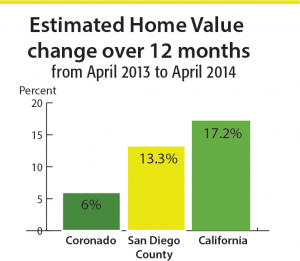 Coronado benefits from being a niche market. Ruth Ann Fisher, broker with Del Coronado Realty, explained, “We are a relatively small island and have limited land. There is only so much space and with those limitations, supply and demand play a more dominant role.”

Because the cost of land in Coronado so heavily outweighs the cost of the structure, valuing property here is different than anywhere else in San Diego and in most major U.S. markets, noted Debbie Riddle, head of Team Riddle at Lee Mather. Land values in Coronado are close to $12 million per acre, she noted, punctuating her point with three words: “Land, land and land!”

“If you own in Coronado,” she continued, “you already have what buyers want, and that is to own something here. Because of that, sellers can list at higher prices than other areas could demand.” Morabito agreed: “Across the bridge, dual-income families are buying homes in the $500,000 to $700,000 range — a range which really isn’t available on the island anymore.”

Kory Kavanewsky, Coronado branch manager/loan consultant at CMG Mortgage, drew a comparison: “The $400,000 to $600,000 market in San Diego is very active right now. In Coronado, the $900,000 to $1.5 million price range is highly sought after and the biggest challenge is inventory. There are only so many homes available in this range and there are a lot of active buyers.”

The limited inventory coupled with high demand contributes to a number of other trends on the island as well:

Fewer homes also means increased competition among buyers, making it difficult for buyers who need financing to compete with cash buyers. As prices increase, said Crane, “young families can’t afford to buy a single-family home here. Cloud condos (condominium complexes with no homeowners’ fees that are named so because units have an exclusive area at a point in the clouds 50 feet above the property) are becoming the more affordable option for younger families so we’re seeing an increase in those.”

Morabito said that the buyer demographic has changed since the downturn. “Buyers financing in 2005, 2006 and 2007 had looser rules, and could more feasibly get onto the island. Today that’s changed,” he said. “A huge percentage of buyers in Coronado are all-cash buyers and the island is becoming more and more a vacation and second home destination.” He estimated that more than half of homes on the island are second homes and vacation properties.

The rental market is also responding to industry trends. Crane explained, “Many homeowners who couldn’t sell during the downturn rented out their properties to wait it out, but those properties are now being sold with more success, diminishing the availability of rentals on the island.” Additionally, when rental properties sell, buyers often tear them down to build homes instead, further limiting options for renters. With a tighter rental market, rent prices are increasing: “An updated 3-bedroom, 2-bath home can run renters anywhere from $3,500 to over $5,500 a month,” said Crane. Military families have historically made up a substantial portion of Coronado’s renters, and since many of them cannot afford those rates, they’re renting elsewhere.

Todaro said the other big trend in Coronado is the “insane amount of new construction everywhere you look.

“It’s tear downs, remodels, rehabs.  We have a lot of post-World War II stock that hasn’t really been touched much,” he said. “It’s always an ongoing debate of whether we are losing our diversity of homes when we build new construction. But so much of what is going up today is architecturally significant. Eighty years from now many of these contemporary homes will be considered historic.” 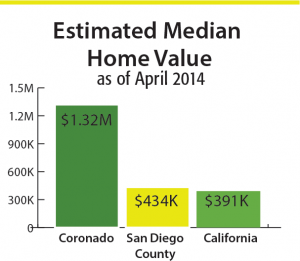 Fisher concurred that a trend in Coronado’s current market is to buy and flip. “Many people are purchasing properties that need work in order to remodel and sell. There is definitely money to be made because many people buying as end users want properties that are turnkey and ready to move into,” she said.

Nelson said it’s becoming increasingly difficult for buyers who need financing to compete with all-cash buyers. He advised, “Buyers with financing contingencies can be more aggressive in other ways. They can shorten the amount of time allowed for inspections or remove them entirely to compete with cash buyers.”

Kavanewsky said that jumbo loans are back with “rates and terms that are very attractive.” Kavanewsky has also seen a resurgence in home equity lines of credit, which allow borrowers to put less down and avoid private mortgage insurance and/or use the loan to improve their property. And Kavanewsky sees more good news for borrowers: “Banks are motivated to lend again, debt-to-income thresholds have been slightly reduced, and interest rates, while about a half percent higher than they were this same time last year, overall are still quite low.”

In the near future, Nelson anticipates a continuing shortage of new homes coming on the market with values trending upward. He also believes homes on the higher end of the value range should see a pickup in activity. Fisher concurred: “Indications are this market is going to continue on its current path, and I don’t anticipate a large dip in values. If you want to buy in Coronado, take advantage of loan rates and buy. It isn’t going to get less expensive to live in paradise.” 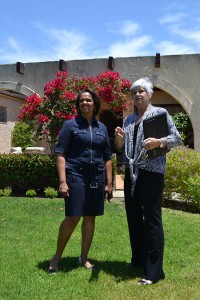 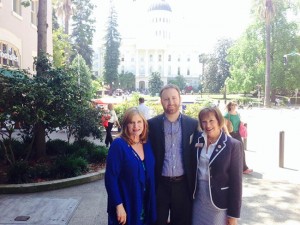 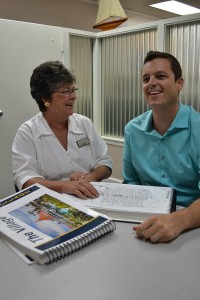 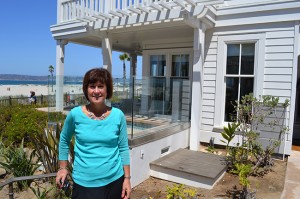