The hospitality industry strives to be on the cutting edge of technology, offering innovative designs that make life oh-so-easy.
Here, we look at hotels across the world that have led to creative interpretations for Coronado’s design community.
Maybe you’ll pick up some ideas to keep those vacation dreams alive at your own abode.

Pocket windows and  outdoor living Architect Christian Rice found inspiration from Bacara Resort in Santa Barbara in the creative way the bedroom opens into the bathroom. “I like the wood shutters that give the option of privatizing the area if desired, or leaving it open to create a greater sense of space, light and openness.” Rice has designed a variation of this detail into a few housing projects, including what he terms a “pocketing window” to give a greater sense of space to a master suite, yet still providing the option of closing the window as desired.

In 2008, Christian and Allison Koop Rice honeymooned at the Four Seasons Jimbarin Bay in Bali, where all rooms feature open villas in a little walled “compound.” Rice took inspiration from the outdoor living area and the way it was integrated into the overall hotel suite, a concept which he has incorporated into several of his Coronado home designs. While the proportions are obviously larger at the resort, the core idea carries over to Coronado well, said Rice, which is “to provide a comfortable area to enjoy our amazing climate.”

Nailing coastal style Prior to establishing his Coronado-based building firm, Flagg Coastal Homes, John O’Brien toyed with the idea of establishing a series of coast-to-coast inns, and even secured the rights to use a well-respected restaurant brand — known for waterfront and showcase locations — as the name for his inns. Thus, he began a quest to seek out distinctive properties that would provide inspiration. Fortunately for Coronado, O’Brien changed direction and channeled his hotel-driven inspirations into home designs, culminating in the presentation of Coastal Living magazine’s 2014 Showhouse, on tour through September at 100 Ocean Drive in Coronado.

Among his inspirations are:
Shutters on the Beach, Santa Monica
A member of Leading Hotels of the World, Shutters on the Beach recalls both the traditional architecture of America’s quintessential beach resorts and inviting cottages of the Southern California coast. Three separate buildings comprise the structure, all visually linked by elaborately detailed slate-grey shingled siding, flower-covered trellises, balconies and cabana-striped awnings. “This property above all others absolutely nails coastal design,” O’Brien said. ”The lobby and restaurant are exceptional.” 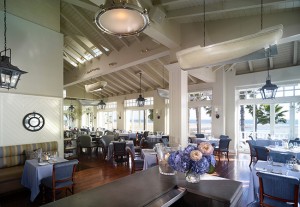 The Inn at Perry Cabin,  St. Michaels, Md.
This charming manor house and spa, renowned for its gardens and relaxed rural lifestyle, is on the eastern shore of Chesapeake Bay. “Here’s our take on their claw-foot tub,” said O’Brien, “It’s on 1030 Coronado Avenue … ‘Irish Sea.’” (O’Brien installs brass nameplates to all his Coronado properties, another nod to East Coast inns and manors.)

The White Elephant, Nantucket Island, Mass.
Named one of the world’s best hotels by Travel & Leisure every year from 2006 through 2014, The White Elephant masterfully combines island charm with a blend of luxury and sophistication. Outside the main hotel and individual cottages, you’ll find grey-weathered shingles with white trim, well-manicured lawns and gardens overlooking Nantucket Harbor, and wicker chairs to sit a spell and soak it all in. John O’Brien took inspiration from the hotel’s elegant and light-filled interiors. His signature Flagg Coastal Homes style has embraced the philosophy of this East Coast resort, where traditional architectural style honors the community’s village-like settings, and beautifully executed details create tasteful, comfortable spaces for contemporary living.

“Every detail there is perfect. It creates a perfect homage to the existing building while still being clean and updated,” said Nicolls, who, along with her business partner, Karyn Frazier, often marry the old and the new, sometimes repurposing items into innovative new designs. “I love their use of white in all their designs — white walls, white bathroom tiles and white bedding create a clean, spacious feel and make the original wood floors and architectural details stand out. You know a hotel has achieved an amazing design when you never want to leave your room! Nicolls used the Washington School House for inspiration in designing a bed-and-breakfast concept for a Coronado client. (She’s keeping it under wraps for the time being, but stay tuned!)

Beach Village inspires a desert guesthouse
Jackie and Graham Bell are Tucson homeowners who purchased a unit at the Beach Village at Hotel del Coronado in 2007 through Ruth Ann Fisher at Del Coronado Realty. Every summer the Bells and extended family enjoy reunions and special occasions at Beach Village and have found that the combination living room and kitchen of their Beach Village condo was quite conducive to large gatherings.

They borrowed that concept when they recently built a guesthouse behind their 1939 Spanish Colonial home in Arizona. Both floor plans include two bedrooms and two baths and feature a linear layout for the living room and kitchen, with a wall of windows at one end.
“We copied so much of the feel and the design because it is absolutely utilitarian,” said Jackie Bell. “It’s so easy to access. We took just the elements — especially the high ceilings and the living room and kitchen combination. It’s so pragmatic, you have room for everyone.”

“Our interior design in Tucson is more rooted around desert colors, with a Mexican/Spanish feeling,” Bell said. “We do have paintings of the beach by the artist, Pino, who paints with warmer colors, a more European, traditional approach.”
And that picture window? “Instead of looking out on the ocean, our view is of cacti,” she said. “Both are quite special.”