Over the years, the property at 1027 Park has had numerous owners and names. For severaal years up until 1972, it operated as the Hotel Coronado Biltmore.

For the past four decades it was known as the Village Inn, until Coronado residents and business partners John Murphy and Ann Keyser purchased it last year. Murphy and Keyser have a solid history of real-estate investment and restoration of historic properties throughout Coronado including The Chateau (circa 1939) at 727 D Ave. and The Monterey (also on D, across from Vons). The latter project converted a 1920s-era Spanish Mediterranean-style apartment complex into a historically designated condominium project.

Hotel Marisol Coronado may be Murphy and Keyser’s crowning achievement.

Keyser describes Hotel Marisol as a “coastal boutique hotel” and, as with most successful renovations, the delight is in the details.

Prior to entering real estate investment, Keyser worked as an interior designer, owning her own firm in San Diego. In addition to her business degree from San Diego State University, Keyser studied interior design at the Design Institute of San Diego. In touring the property a few years ago, Keyser noticed it was slowly deteriorating; there had not been any significant modernization work over the past 40 years. Still, Keyser recognized that the stately three-story building had “great and wonderful bones.”

“I uncovered several photos of the building from its earlier years,” she said. “I realized it had quoins [masonry corners on building] and I could see they were still there under the stucco.”

Keyser chose the name Hotel Marisol Coronado to honor the building’s Spanish Eclectic style as well as its close proximity to the beach.

Shortly after the purchase went through last year, Keyser shared her vision of the property with Coronado’s Historic Resource Commission and obtained a historic designation. Restoration work began in earnest last January. Keyser had the stucco sandblasted off and returned the building to its original façade coloring of a cream with taupe accents. Two large wooden windows were replicated to the period and new wrought-iron finishes and period lighting fixtures were installed. A new ADA handicapped-accessible ramp at the building’s entrance was also embellished with wrought-iron railings.

While the footprint of the six rooms each on the second and third floors was largely unchanged, all spaces were renovated from floor to ceiling.

The first floor has gone from dark and dreary to open and elegant. The old space was chopped up and much of it had been cordoned off for a manager’s quarters. A side room, without a seeming purpose, had been mostly unused, and furnishings had seen better days. Now the space is brightened with a light palette and paintings of the sea (by Keyser’s sister, artist Susan Phillips). Three guest rooms have been added, including a king-bed handicapped-accessible unit. The former side room is now the living room, outfitted with smart contemporary seating and, each morning, the site of a wide assortment of breakfast pastries, fruit, juices and coffee.

Keyser recruited Sue Gillingham as managing director of Hotel Marisol. Gillingham is best known and respected in Coronado for overseeing the opening and formative years of Coronado’s 1906 Lodge.

Gillingham noted that the living room, which opens onto a garden patio, was originally a popular gathering room at the Blue Lantern Inn. “It was the site of formal dinners and service club gatherings,” she said. “It’s satisfying to return it to its former prominence.”

The original curved reception desk was retained with the addition of a new marble countertop. Likewise, the Otis elevator still services all floors. “It has a lot of character,” said Keyser. “The cab is wonderful.”

But it’s that garden patio that has transformed this formerly cramped property into a spot of beauty for Coronado. Out of sight from hotel guests and the general public for decades (it had been used as a storage area), the space has been returned to its original garden setting, with well-tended hedges, olive trees and fragrant flowerbeds, travertine tile, and comfortable seating areas. “I’m a gardener,” Keyser said. “And I know it’s important to have a serene and beautiful space for quiet times.”

The hotel provides free beach chairs and towels for guests. Gillingham noted that while the hotel does not have onsite parking, it offers free loaner bikes and optional limousine services for airport transfers. 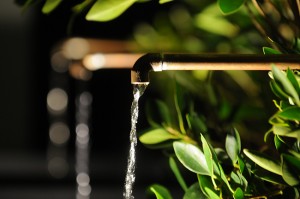