home Restaurants It’s easy to get hooked on Bluewater Boathouse

I had never tried “sand dabs” before, but there they were on the extensive Bluewater Boathouse menu, and I was intrigued. “They’re small fish, and very delicate, and we offer them with a light lemon sauce and capers,” the waitress said. “They’re one of my favorite items on the menu.” Her smile was genuine, and I felt I could trust her; after all, she not only answered this question but several others posed by my dining companion.

The sand dabs melted in my mouth, and I was pleased with my accompanying cheesy scalloped potatoes and fresh vegetables. The entrée was $16.95.

My friend’s lemon pepper mahi-mahi ($24) featured a crunchy crust that was a nice counterpoint to the mild fish that easily fell into moist flakey bites; it was served atop scalloped potatoes and sautéed spinach with a chili cilantro sauce.

By the time we finished, we were full, especially considering the fresh homemade bread and large house salads we began with.

After opening the week before Coronado’s busiest weekend (Fourth of July), Bluewater Boathouse now has its sea legs and is cranking out some of the best seafood in San Diego County. New interiors feature wood-plank flooring, a light taupe pallet with crisp white trim; the effect is nautical, but not kitschy.  It’s like stepping into a comfortable beach cottage. 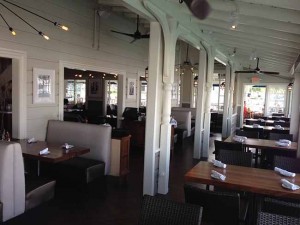 Bluewater Boathouse is the sixth location of the Bluewater family of restaurants and the first to open in San Diego County. The restaurant group was founded in 1996 by Jimmy Ulcickas and Rick Staunton with the opening of its first restaurant in Newport Beach’s Cannery Village.

There’s a big difference between a seafood restaurant and a restaurant that offers seafood on its menu, Ulcickas noted. “Our direct relationships with fishermen on both coasts give us access to certain varieties that simply aren’t available anywhere else.”

“We buy a lot of fish, so our vendors really value our business,” Ulcickas said. “They know freshness starts at the back door and they send us only the best.”

If you don’t see exactly what you want on Bluewater’s menu, ask your food server.  The chefs are adept and eager to prepare fish just the way you want it. Baked, steamed, sautéed, blackened … yeah, they do that!

Ulcickas and Staunton had been trolling the San Diego–Coronado area for nearly 10 years, looking for a desirable location. The right opportunity presented itself late last year when Marty Jensen, part owner and general manager of 1887 on the Bay, announced the restaurant was for sale. (Jensen, now retired, had also been the longtime general manager of the Chart House, which had a 30-year run on the site.)  But Ulcickas said there was no way they could make a deal work for a lease that would only run 13 years, especially considering that the property would require substantial renovation.

“The city of Coronado is really the entity that made the deal work,” Ulcickas said. “They wanted to secure a long-term restaurant tenant that was not a chain but had some experience so it would become an asset to the community. They gave us a new 20-year lease.”

Although it has six, soon to be seven locations, Ulcickas points out several reasons his restaurants aren’t a chain.

He draws a parallel by looking back to the heyday of the Chart House restaurants, “when those restaurants were head-turners based on their environment and architecture.”

Bluewater’s Newport Beach, Redondo Beach, Coronado and Catalina Island (which opened last year) restaurants are all set on the water. The other two restaurants are away from the coast in Tustin and Phoenix. A seventh Bluewater will open this winter in Temecula, a location Ulcickas and Staunton had long been eyeing. “The Temecula wine country is just emerging as a competitor to Santa Ynez and Paso Robles,” Ulcickas said. “We really believe in the future of Temecula.”

And he also believes in Coronado. “Great city, great people,” Ulcickas said, noting that all of the former restaurant’s employees who wanted to stay on were offered jobs, and 30 more staffers were hired, necessary to cover the expanded hours that now includes lunch daily. 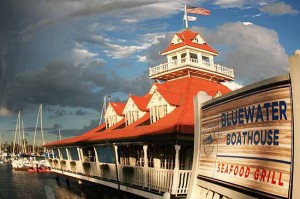 For dinner, Ulcickas said Bluewater is “not a $75 entree with $50 pairings” type of place.  “It’s casual with friendly prices, friendly people and friendly surroundings.” If you hear the word “friendly” a lot from Ulcickas, know this:  His stepfather started the Friendly’s Ice Cream Parlor restaurants and grew that company into (hate to say it, but, here goes…) a chain of 650 restaurants.

Ulcickas said he is partial to Bluewater’s cioppino, and its chipotle blackened swordfish ($29.95). But on my next visit, I’m ordering the cedar plank salmon, ($27.50), cooked on specially selected planks to impart the most flavor.

Or, here’s an idea: forget stuffing the bird, and head down to Bluewater for its holiday baked stuffed Maine lobster, available throughout November and December. Stuffed Maine lobster is a classic family feast that originated in Boston-area seafood restaurants and has since become a cherished New England holiday tradition.

In keeping with Bluewater’s mission to practice 100 percent responsible harvesting and purchasing, “sustainable Maine lobster is a natural,” Ulcickas said. “Maine lobster harvesters were environmentally conscious and ‘eco-friendly’ long before it was fashionable. They harvest their lobsters the same careful way they have for over 125 years — by hand, one trap at a time, thus protecting the quality of their product and the marine environment.”

Order the lobster; a turkey will thank you.