home In The Spotlight Churches of Coronado

In the coming issues, our new series on Coronado’s churches will explore the history, fellowship and community goals of some of the religious establishments on the island.

Episcopal church and congregation built on a strong foundation

Be they military families, winter snowbirds, a robust Arizona summer contingent or local residents, everyone is welcome at Coronado’s Christ Episcopal Church.

The church, designed by famed San Diego architect William Sterling Hebbard and built in 1894, has received many worldwide visitors. The initial building cost about $10,000 and was funded interest-free by businessman Charles Thomas Hinde (who came to Coronado at the behest of John. D. Spreckels). Hinde dedicated the church to his daughter, Camilla, who had died at the age of 13. The Romanesque-style structure was constructed with hand-hewn granite.

Today, Christ Church’s physical footprint occupies an entire city block of Coronado, distributed over two half blocks facing each other in the 900 block of C Avenue. On the west side of the avenue are the church, parish hall and offices, and the majority of the Christ Church Day School complex. On the east side are the Thrift Shop, Sexton Apartment, Kindergarten cottage, school playground, youth house, parking lot and Clare’s Cottage — the choir, music and nursery center. With the exception of the junior kindergarten and Opportunity Shop thrift store, these facilities were all upgraded in the church’s $2 million capital campaign, which concluded in 2014.

Within the church is the welcoming serenity of its stained glass windows, which were crafted by San Francisco artist Bruce Porter in the Tiffany Studios in New York and installed in 1896. The windows, made from glass from Scotland, cost roughly $6,100. The church is open to the public daily; an inviting space for quiet contemplation amid the bustle of today’s world.

“We love and cherish our historic tradition and beautiful setting,” said the Reverend Anne Bridgers, Christ Church’s rector since last September. “It is a place of generous Christianity, a place where the liturgy is rich in tradition and a place for all to celebrate God’s abundance.”

Last year, the church celebrated its 125th anniversary and said goodbye to rector Reverend Edward Harrison and his wife, Teresa. Harrison served as Christ Church rector for five and a half years before retiring to his home state of Florida.

Before relocating to Coronado, Bridgers served a parish outside of Philadelphia. “I’m southern by birth which is why I love Southern California,” Bridgers said.

She and husband, Dixon, are parents of four grown children and grandparents of three granddaughters. But slowing down is not on the couple’s radar. Dixon is  involved with the Episcopal Refugee Network and also serves as an adjunct professor at the University of San Diego’s Business School.

It’s probably some divine plan that even Bridgers’ last name is an affirmation to Christ Church’s longtime tagline, “Bridging Love and Service.”

“Our liturgy is the main reason we are here, but flowing from that is a calling to serve others,” she said.

Bridgers said that Christ Church is always looking for opportunities to serve the community, such as the annual blessing of the animals in October, the all-volunteer Opportunity Shop thrift store on Ninth Street that donates a large portion of the proceeds for outreach to the hungry, homeless, wounded, abused and/or displaced, or summer concerts that feature the church’s recently refurbished organ. “In the Episcopal tradition, quality music is an honored part of our worship, and our organ needed to be tended to in order to offer the finest worship expression,” Bridgers explained.

At first blush, it may seem as if the church’s organ is simply the console that the organist plays during the church service. In reality, it is the pipes that make the sound, and four decades after their initial installation (though the first organ was installed in 1896), they needed overhauling. The console and more than 1,500 pipes (the smallest pipe being the size of a pencil and the largest measuring 18 feet long by one foot in diameter) were meticulously disassembled, and all 10 tons of the organ were shipped to the Reuter Organ Co. in Lawrence, Kan., for a six-month refurbishing process. The console and pipes are back at Christ Church and reassembled. Now the painstaking process of “voicing” the organ (manipulating each pipe to make it produce a certain sound) is taking place.

Bridgers, a teacher prior to becoming an ordained minister 16 years ago, used the opportunity of the project to educate Christ Church Day School’s (CCDS) students, inviting all 120 of them to the sanctuary to walk inside and explore the organ space. Having had a sneak peek at the pipe room behind the archway, students gained a new-found appreciation for the instrument. Bridgers said, “This simple ‘field trip’ enhanced their sense of wonder and curiosity, which complements the school’s goal of developing life-long learners.”

In 1957, as an outreach of Christ Church, CCDS opened its doors to 41 pupils wearing grey jumpers or pants and navy blue sweaters. Teachers wore the same uniform. Tuition was $25 a month. Over the years, the school has gone through numerous changes (including extensive renovations in summer 2013), but, said the Head of CCDS, Judy Hunsberger, “the heart of the school has remained the same.” In 1987 the school added fifth and sixth grades. Since then, it also added certificated specialty teachers for art, music, physical education, Spanish, and spiritual nurture, as well as a junior kindergarten in 2010. The school is now a member of the National Association of Episcopal Schools, and has earned the highest six-year accreditation term offered by the Western Association of Schools and Colleges. Today CCDS has computers in every classroom as well as a computer lab, student laptops for fifth and sixth graders and a new science lab, built in 2012. In 2008, CCDS was among the first schools in California to adopt Singapore Math and uses the Readers and Writers Workshop model from Columbia College. Hunsberger explained, “Due to our small class sizes, which are capped at 16, and well-rounded offerings, our graduates are outfitted with a strong academic and moral foundation and leadership skills that last a lifetime. CCDS grads take with them the spirit of service and community cultivated while being a part of the Christ Church community.”

That seems to be the congregational sentiment; fellowship is important as evidenced by any excuse to host a brunch in the parish hall (complete with Bridgers’ southern cheesy grits), a festive dinner in the courtyard, or a happy hour at one of Coronado’s local watering holes.

The three weekly liturgies include a Thursday morning Healing Service at 10 and two Sunday services at 8 and 10. (the latter featuring the Christ Church choir), plus 9 a.m. forums on an array of topics. The congregation is comprised of around 500 people and average Sunday attendance is between 200 and 240. A staffed welcome table and gourmet coffee, tea and doughnuts are available after each service, encouraging conversation and fellowship. 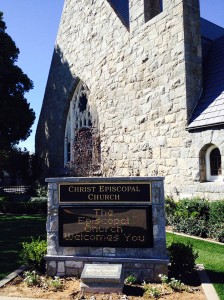