Education through the Coronado Unified School District can begin as early as 3 years old.

Crown Preschool, which opened in August 2013, offers two-, three-, and five-day-a-week schedules from 8:30 to 11:30 a.m. for 3-year-olds and 12:15 to 3:15 p.m. for 4-year-olds. Tuition for these options ranges from $220 to $535 per month in equal payments over 10 months. The school, which is self-sustaining through these tuition payments, also offers extended daycare options starting at 6:30 a.m. and running until 6 p.m. “It’s very flexible,” said Kathy Mathis, Coronado Unified School District’s director of preschool and childcare. “Parents can choose the hours that work for them and how many days a week.” Extended hour care costs are roughly $4 per hour.

Classes at Crown Preschool are capped at 18 students. Each class has a general education teacher and special education teacher, both of whom hold California multiple subject credentials with an emphasis on early childhood education, and a preschool teacher assistant, resulting in a student-to-teacher ratio of six to one.

Village Elementary Principal Whitney DeSantis said of the teacher/student arrangement, “It was my dream to see a full inclusion, co-teaching model at the preschool level. Now, when you walk into one of our classrooms, no matter what their needs, all students are working together in one self-contained classroom, being taught by experts.”

Silver Strand State Preschool is a state-funded preschool on the Silver Strand Elementary School site. It’s open to all Coronado students, but because it’s funded by the state, Mathis explained, admission is eligibility-based. “Priority depends on family size and monthly income, and 4-year-olds are accepted before 3-year-olds,” she said. Classes are held five days a week from 8:15 to 11:45 a.m. There is one teacher and two preschool aides for every 24 students and classes are a mix of 3- and 4-year olds.

Mathis noted that the state is no longer fully funding the preschool, so any profits Crown Preschool makes support Silver Strand State Preschool.

Both schools use “Splash into Pre-K” curriculum by Houghton Mifflin Harcourt, which, Mathis said, “is a comprehensive program that introduces all curricular areas.” Students learn through hands-on activities, and both age groups learn similar concepts, though 4-year-olds have slightly expanded lessons. “For example,” said Mathis, “when the kids studied volcanoes, both age groups built small volcanoes out of hills of sand and filled them with baking soda, food coloring and vinegar to make them explode. But the 4-year-olds were asked to make predictions before building, and then explain the basic science behind the explosions.” Another math and reading activity kids at both preschools did was to read Goldilocks and the Three Bears and then make porridge to practice their measuring skills, Mathis explained.

In the coming months, both schools will adopt a program called “Circle of Education,” a social and emotional curriculum crafted by San Diego State University’s Chair of Child and Family Development, Dr. Shulamit Ritblatt. It’s designed to meet the social and emotional needs of young children through music and stories. “It addresses things like sharing and identifying feelings,” DeSantis said.

Mathis said what makes Crown and Silver Strand preschools special is the holistic view on child development, including academic, social and emotional components. “We help get our youngest community members ready to learn as they approach kindergarten,” Mathis said. 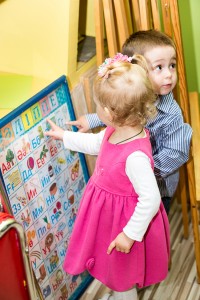