Freud’s Last Session At the outbreak of WWII Sigmund Freud has a meeting with a young Oxford professor, C.S. Lewis. Playwright Mark St. Germain presents an exhilarating conversation both profound and humorous.

West Side Story A fresh and rousing production of the American musical retelling of Romeo & Juliet. Filled with classic numbers like Tonight, I Feel Pretty, Somewhere, America, and Maria.

A Year with Frog and Toad Based on the beloved books by Arnold Lobel, the musical follows the woodland adventures of two amphibious friends, a worrywart toad and a perky frog, with their assorted colorful hopping, crawling and flying companions, over the course of a year.

Best Boy documentary screening Coronado Island Film Festival will screen Best Boy, Academy Award winner for Best Documentary in 1979. The film’s director/producer, Ira Wohl of Coronado, will be on hand for commentary and questions and answers following the screening. Wohl will serve as head juror for the Film Festival’s Documentary division. (The Film Festival dates are Jan. 15-18, 2016.) 2:30 p.m. at the Coronado Performing Arts Center at Coronado High School. Students are free; others, $5. (844) 323-CIFF or coronadofilmfest.com.

Bay Bridge Run/Walk This annual Navy-hosted event includes the public in raising money for the Navy’s Morale Welfare and Recreation (MWR) programs. A 4-mile run/walk to Coronado’s Tidelands Park from downtown San Diego over the Coronado Bay Bridge. During the finish line celebration, runners receive a commemorative event shirt and complimentary transportation back to downtown. 858-848-5786 or navylifesw.com/bridgerun

Steve Martini discusses The Enemy Inside The Coronado Cultural Arts Commission presents a talk by New York Times bestselling author Steve Martini, discussing his writing career and introducing his newest book, The Enemy Inside. Book signing opportunities will also be available. Martini is the author of numerous New York Times bestsellers, including the Madriani series, which centers on defense attorney Paul Madriani and is based in Coronado (Madriani’s fictional office headquarters is in the El Cordova Hotel complex). Martini spends several months a year staying in Coronado, researching and writing the series. 2-4:00 p.m. at the Coronado Public Library. Coronadoarts.com

Coronado High School Graduation & Reception The CHS Class of 2015 will graduate on Niedermeyer Football Field at 7:30 p.m., marking the 100th graduating class from the school. Graduating seniors must arrive by 6 p.m. Reception to follow in the CHS Quad. chs.coronadousd.net or (619) 522-8907

Armchair Travel Series lecture Frederick Zarndt will present on The Lao People’s Democratic Republic, or Laos, a landlocked country bordering Cambodia, Vietnam, Burma, and Thailand. In terms of GDP Laos is one of the world’s poorest countries, yet it ranks higher than the United States on the Happy Planet Index. As a  consultant to Digital Divide Data, a nonprofit organization whose mission it is to provide disadvantaged youth with education and work opportunities in Laos, Cambodia and Kenya, Zarndt visits Laos frequently and will share his experiences. Refreshments served from 6 to 6:45 p.m; 45-minute presentation to follow. Coronado Community Center Nautilus Room, 1845 Strand Way.

Flag Day Barbecue at the Del with Gary Sinise and the Lt. Dan Band A Flag Day Barbecue and concert on The Del’s scenic North Beach will include paratroopers donning the American flag for a show in the sky and a rock-’n’-roll concert performed by Gary Sinise and the Lt. Dan Band. Food, beer, wine and special Flag Day cocktails will be available as well as sand chairs to rent.

In 2011, the Gary Sinise Foundation began raising funds to build custom Smart Homes for America’s severely wounded veterans from across the nation, featuring automated amenities to ease the challenges they face and to help restore their everyday independence. In 2014 alone, construction on 27 Smart Homes was either completed or underway.

For more than a decade, Gary Sinise and the Lt. Dan Band (named after Sinise’s character in Forrest Gump) have brought their live musical performances to United States military personnel and their families stationed around the world. Through its concerts, the band aims to boost morale on military bases at home and abroad, entertain, educate, and build communities.

Low Tide Ride & Stride Put on by Rotary Club of Coronado, runners traverse a scenic 8.2-mile run or ride along a stretch of beach few have set foot on. This yearly event is run on the lowest tide to provide a wide stretch of hard packed sand from Imperial Beach to Coronado. Lowtiderideandstride.org or (619) 435-8334

Summer Arts & Crafts Fair  More than 50 booths will have one-of-a-kind arts and crafts for sale in the Christ Church parking lot (919 C Ave.) from 9 a.m to 2 p.m. Event is free; all money raised from sales will benefit Coronado High School Cheer.

AT THE CORONADO LIBRARY:

Joseph and the Amazing Technicolor Dreamcoat The story of the boy in the coat-of-many-colors who changed history.

Motown the Musical The true story of Motown founder Berry Gordy’s journey from featherweight boxer to the heavyweight music mogul who launched the careers of Diana Ross, Michael Jackson, Smokey Robinson and many more.

Come From Away A musical based on the true story of when the isolated town of Gander, Newfoundland, unexpectedly played host to the world when 38 planes were diverted there on 9/11.Undaunted by culture clashes and language barriers, Gander entertained the stranded travelers with music and an open bar.

Arms and the Man In George Bernard Shaw’s romantic comedy, the beautiful Raina Petkoff is about to marry the heroic soldier Sergius. But the battlefield sweeps into her boudoir when an enemy soldier takes refuge under her bed. Soon she will have to decide between her romantic ideals and the surprising sensations of new love. 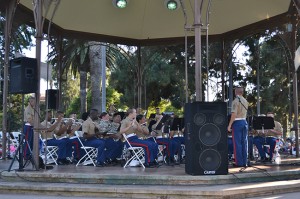 All concerts take place in Spreckels Park at 6 p.m. unless otherwise noted.

5/24: Coronado Concert Band sponsored by the City of Coronado

7/12: PopVinyl sponsored by The Auen Foundation

8/16: The Company Men sponsored by Edye Denney and Dick Zoellner