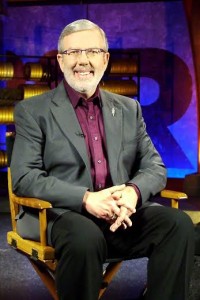 Leonard Maltin, one of the world’s most respected film critics and historians, will serve as Honorary Jury President for the inaugural Coronado Island Film Festival (CIFF), it was announced today by CIFF President and CEO Mary D. Sikes.

The festival will be held Jan. 15 – 18, 2016. Maltin and his wife Alice will be present for the entire festival weekend. Maltin will introduce celebrity honorees, present the awards to filmmakers and participate in one or more panel discussions, including the “Meet the Critics” breakfast.

Maltin is best known for his widely used reference work Leonard Maltin’s Movie Guide and its companion volume Leonard Maltin’s Classic Movie Guide, as well as his thirty-year run on television’s Entertainment Tonight. He teaches at the USC School of Cinematic Arts, appears regularly on Reelz Channel, and hosts the weekly podcast Maltin on Movies with Baron Vaughn for the Wolfpop network.

His books include The 151 Best Movies You’ve Never Seen, Of Mice and Magic: A History of American Animated Cartoons, The Great Movie Comedians, The Disney Films, The Art of the Cinematographer, Movie Comedy Teams, The Great American Broadcast, and Leonard Maltin’s Movie Encyclopedia.

Maltin is a definitive expert of the history of Disney films. He first wrote about Walt Disney in his magazine Film Fan Monthly at the age of 16. He later expanded that material into a book, The Disney Films, and went on to host and co-produce the Walt Disney Treasures DVD series.

He has served two terms as President of the Los Angeles Film Critics Association, is a voting member of the National Film Registry, and was appointed by the Librarian of Congress to sit on the Board of Directors of the National Film Preservation Foundation. He has appeared on innumerable television programs and documentaries.

Maltin has been the recipient of awards from the Los Angeles Film Critics Association, American Society of Cinematographers, the Telluride Film Festival, George Eastman House, Anthology Film Archives, and San Diego’s Comic-Con International. Perhaps the pinnacle of his career was his appearance in a now-classic episode of South Park. (Or was it Carmela consulting his Movie Guide on an episode of The Sopranos?) He holds court at leonardmaltin.com and can be followed on Twitter and Facebook.

“I love the idea that a place associated with so many memorable movies has embraced the idea of its own, home-grown festival and I’m excited to be part of it,” Maltin said. “Everyone knows that Billy Wilder’s classic comedy Some Like It Hot was filmed in and around the Hotel del Coronado, but in fact the community first welcomed moviemakers in 1912. During World War II the local Naval Base was featured in a number of films starring such notables as Errol Flynn, Olivia de Havilland, Walter Pidgeon and Fred MacMurray. There was even a 1935 musical feature called Coronado.”

“Leonard Maltin is iconic in the world of cinema,” said Friedenberg. “A true motion picture historian and film lover, Leonard is beloved by all who love the magic of the movies.”

The Coronado Island Film Festival will feature films in three categories:  documentaries, shorts and narratives. The four-day festival will include an Opening Night Reception, a Filmmakers Reception and Celebratory Tribute and an Awards Reception and Ceremony and a family-friendly beach bonfire and movie at Del Beach on the festival’s closing night.

The festival will provide grants to five student filmmakers and will also bestow a “Service to Country” award to a film that embodies the concept of service.

The Festival’s Presenting sponsor is Hotel del Coronado; Vintage Village Theatre is the host theatre with other screening venues to be announced. A Community Organizing Grant from the City of Coronado was awarded in May.