When owners Spiro and Nancy Chaconas opened Spiro’s Greek Café in 1995 at the Coronado Ferry Landing, they wanted to create a family atmosphere that celebrated the flavorful food of Spiro’s homeland, Corfu, Greece. 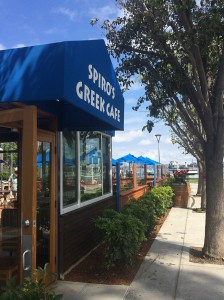 Now, 20 years later, after closing for three months while the restaurant underwent a complete overhaul, they’ve reopened with the same intention, but with a bigger kitchen and menu to serve their patrons. The restaurant has also introduced a new name, Spiro’s Greek Café, that reflects the restaurant’s wide array of Greek specialty dishes, in addition to its popular gyros.

“Everything is brand new — it’s basically a new restaurant,” said Spiro. “Locals and tourists would come in no matter what because of our high quality food and gyro meat, but we wanted to improve and open up the space to create a better dining experience.”

The restaurant hosted a grand re-opening celebration and ribbon cutting ceremony on July 22, showcasing the remodel that almost tripled the size of the cooking area, and extended a portion of it to incorporate walk-in refrigeration. With that, explained Spiro, comes an expanded menu. “We’ve included more appetizers and especially more kebabs, which seem to be the ‘in thing’ nowadays. We have filet-mignon, lamb-loin, and fish kebabs, and we’re the only restaurant in California that serves chicken gyros. Those are a big hit!”

The melt-in-your-mouth spanakopita and delectable baklava are still on the menu, which also includes pita sandwiches, French fries, soups and salads.

Spiro’s favorite parts of the remodel are the new entryway, which was opened up to include a bar with a bright skylight overhead. The restaurant features Coronado Brewing Company beers on tap and serves Fallbrook Winery wines. The interior enclosed patio area now features increased seating, including comfortable new banquettes, and new furniture on the outside patio as well, where diners can catch fantastic views of the San Diego Bay and downtown skyline.

The indoor patio’s overhead flat-screen television is part of the Chaconas’ plan to offer Monday night specials on food and drink during football season. And, on Saturday nights, in keeping with its family-friendly vibe, the restaurant will serve family-style dinners with menu items such as rack of lamb and prime rib. The restaurant’s happy hour Monday through Thursday from 3 to 5 p.m., features $2 off appetizers and $2 off beer and wine.

The Chaconases live in Coronado where they have generously given to charities throughout the city. Both Nancy and Spiro have been avid supporters of the Coronado Schools foundation, with Spiro serving as a past president of the Foundation. A member of Rotary Club of Coronado, Spiro was also named Citizen of the Year in 2013 by Coronado Private Bank.

Spiro’s Greek Café is a new and improved space, but the foundation of the restaurant remains the same: “Through both the menu offerings and the new atmosphere, we are a family restaurant that caters mostly to our locals. We want to serve the patrons who have been so loyal to us,” said Spiro.

To grab a little piece of Greece: