The Kane family may have gone from riches to rags, but seen through the eyes of young W.K., true wealth lies in a person’s integrity.

Denver McGarey drew from much of his own life’s experiences in weaving this tale of a family torn apart by the trauma of alcoholism.

McGarey, home based in Coronado, is a developer and leasing agent of some of the largest and most prestigious retail and multi-use projects throughout the United States and the world.  As a result, he has wracked up a lot time in the air and his hours writing at high altitude have resulted in a high impact debut novel.

Those “found” hours led him to ponder his life – a childhood that began with privilege and a secure place among the New York elite and then suddenly, without pomp or circumstance, skidded straight into poverty.  It all happened when Denver was just coming of age.

Over the past four years, McGarey infused much of his life’s experiences into The Indenture, published this year.

McGarey will talk about the process of writing his first novel at 5 p.m., Thursday, Oct. 29 at Bay Books, 1029 Orange Avenue in Coronado.

The story is told through the eyes of young William Kane, known as “WK,” the grandson of a New York Supreme Court Justice who amassed a fortune and built a solid reputation among the New York elite.  Sadly, that reputation was slowly eroded by his two sons, including WK’s alcoholic father. Up until age 12, WK lived a life of privilege along with his four siblings in New York society, dividing his time between family compounds in Larchmont and Westhampton.  The circuit included the Westchester Country Club, 21 Club, visits to grandparents’ abodes on Park Avenue, private prep schools, and all the haunts of the moneyed set.

The father’s alcoholism inevitably fractures the family, with the mother abruptly bundling up WK and his three brothers to Scottsdale, Arizona.  But this was not the tony Scottsdale of today: it was a rougher town in the 1960s when the Kanes arrived on its dusty doorstep.

Within weeks of the family’s arrival, it becomes obvious that no support would be forthcoming from the father’s estate, now controlled by a manipulative uncle, intent on securing the bulk of the family estate for himself and his family.

Greed and selfishness run rampant through the pages of The Indenture, with WK’s mother focused on keeping up appearances, frequently at the expense of her children’s welfare, and his older sister intent on marrying into a family of fame, and more importantly, fortune.

The prospect of the daughter’s marriage into moneyed society puts dollar signs into the eyes of WK’s mother, and her power plays expose the true characters of both the bride and groom’s families.  There are benevolent souls and malicious villains as greed takes center stage.

With no money and meager food at home, WK begins mowing yards at age 12, scurrying about Scottsdale after school and on weekends. After raking in $150 in one profitable two-week period, he discovers his mother has taken the funds. No, she hadn’t stolen his money, she explains; it was simply necessary, as he needed to share in the responsibilities of the household.

“My life is embedded in much of the book,” said McGarey, who was named after his grandfather Francis Denver McGarey (1893 – 1950), a New York Supreme Court Justice.   McGarey began a lawn-mowing business in Scottsdale at age 12, and by age 14, he was working in restaurants, and at 16 moved in Property Management and Aviation (FBO) at the Scottsdale Airport. At age 19, McGarey was offered a job by Warner Brothers to be in charge of advance location work for movies in New York City, but declined the offer to take on a career in real estate, beginning in Arizona.

Denver McGarey and his wife, Chris Jennings McGarey, to whom the book is dedicated, live in Coronado.  Five of the seven McGarey children live at home; the older two are making their own paths in the world. 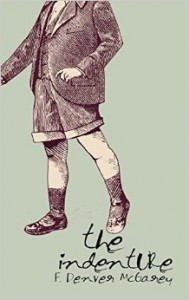