Jack Lemmon used to utter, just under his breath, those three little words at the beginning of each take on a film set. And he did indeed create magic, from The Odd Couple and The Apartment to The China Syndrome and Save the Tiger… and so many more memorable performances. 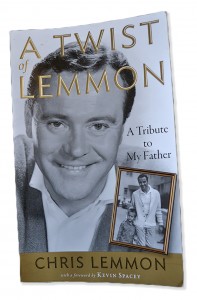 Jack’s son, Chris Lemmon — an actor, producer, pianist and writer (and spitting image of his father) — will pay tribute to his dad in two performances of A Twist of Lemmon, which will precede showings of Some Like it Hot.

Lemmon’s tribute is just one of the offerings that will be on tap at the inaugural Coronado Island Film Festival (CIFF), which will take place Jan. 15-18.

More than 60 movies will be shown, with showings beginning at 10 a.m. and stretching past the midnight hour. Yes, at midnight over the first three days of the festival, three of the campy Sharknado films will be screened, proving that CIFF does indeed offer something for everyone.

Lively panel discussions will bring together film industry insiders: a “Meet the Critics” panel will be led by the festival’s Honorary Jury Chairman Leonard Maltin, world renowned for his movie guidebooks and his 30-year run as movie critic on Entertainment Tonight. A “Meet the Producers” panel will be led by Lisa Bruce, producer of The Theory of Everything, the film about Stephen Hawking that was nominated for five Academy Awards this year. More panels are in development.

Two films with Coronado roots will portray the careers of two political leaders — one Republican and one Democrat and will screen back-to-back at the library’s Winn Room. Mr. Conservative, a film about former Arizona Sen. Barry Goldwater was produced by Tani Cohen, and directed by CC Goldwater, the senator’s granddaughter. Cohen, who grew up in Coronado, will introduce the film and take questions and answers.

Errol Flynn starred in the movie Dive Bomber, filmed at the North Island Naval Base. Flynn’s daughter, Rory Flynn, will share remembrances of her swashbuckling father, and will be accompanied by her son, Sean, an actor who bears an uncanny resemblance to his grandfather.

A special tribute to Dr. Martin Luther King Jr. is planned on Monday, with the showing of Freedom Riders; an introduction to the film and questions and answers afterward will be conducted by its co-producer, Laurens Grant, a multi-Emmy award-winning documentary filmmaker. Another film by Grant, Blank Panthers: Vanguard

of the Revolution, will screen the previous day.

The film festival is an all-pass festival, with access to film screenings, panel discussions, parties and hospitality venues determined by the level of pass. Passes, beginning at $110, can be purchased at coronadoislandfilmfest.com or at the Village Theatre box office.

The making of Coronado’s first film festival involved three years of toil, trouble-shooting and tenacity. And, yes, a bit of magic was thrown into the mix as well, said the festival’s co-executive director Doug St. Denis.

St. Denis was a member of the city’s Cultural Arts Commission, heading the subcommittee of public relations and film. “Everyone came up to me and said, ‘We need a film festival in this town!’” she said.

So, after researching festivals — and there are thousands of them across the globe — St. Denis quickly determined that a film festival could not be run as a subcommittee of a volunteer city commission. It needed to be a self-standing nonprofit entity.

She assembled a team of volunteers and enlisted the help of attorneys Sharon Sherman and Peter Benzian form a nonprofit. That effort was expedited by Coronado City Council Representative Mike Woiwode and Congressman Scott Peters.

Mary Sikes was recruited to serve as the festival’s president and CEO. Sikes, who holds an MBA from Harvard, wrote the festival’s first strategic plan.

Next, Sikes and St. Denis approached Andre Zotoff, newly arrived in Coronado as the vice president and general manager at Hotel del Coronado. They shared their vision for a film festival and Zotoff agreed to not only serve on the board of directors, but also that the Hotel del Coronado would be the festival’s presenting sponsor.

“This festival came about because of the tenacity of two women — Doug St. Denis and Mary Sikes,” Zotoff said. “They were absolutely correct to push for it. And that’s because Coronado is the perfect destination for a film festival.”

He smiled and with a wink added, “And they knew that the Del had to play a big part.”

A number of Coronado movies have been shot on Del premises. There was the 1958 filming of Some Like It Hot, of course, but its movie legacy runs back to the 1890s, beginning with short documentaries shot by the Edison Moving Picture Company, and continuing into the 1920s with two movies starring Rudolph Valentino. Later, there was Steve Martin’s My Blue Heaven, Wicked with Goldie Hawn and Loving Couples with Shirley MacLaine, Susan Sarandon and James Coburn. The Hotel Del’s turrets and towers took center stage in the 1977 filming of the Academy Award-nominated Stunt Man, which will be shown at the festival, with a special appearance by its director, Richard Rush.

Next, the festival board recruited a producing co-executive director, Andy Friedenberg. “The programming of a first-year festival is so critical, and we are so fortunate to have Andy,” Sikes said. “He is one of the most knowledgeable persons about the movies on this planet.”

Friedenberg founded the Cinema Society of San Diego 30 years ago, and it has since grown into five chapters in three states. He also attends and leads tours to film festivals throughout the world. And, needless to say, he watches a lot of movies.

With the team in place, the magic began happening: Friedenberg recruited Maltin, a longtime friend, to serve as the head honorary juror. Bruce, with her Coronado roots, agreed to serve as head juror for narrative films. Upon reading about the festival, Ira Wohl, a part-time Coronado resident, contacted Sikes to say he would like to get involved, and by the way, he had won the Academy Award for Best Documentary in 1979 for his film, Best Boy. Yes, he would be honored to serve as head juror for documentaries.

Board member Jim Gallagher, head of marketing of DreamWorks SKG, agreed to serve as head juror for shorts/animated and live action.

“The caliber of our jury for a first-year festival is extraordinary,” Sikes said. “It attracts a higher level of submissions by filmmakers who want their films viewed by industry insiders.”

Mounting a film festival is an expensive proposition, and The Del kicked off the fundraising campaign with a reception for community leaders. That was followed by events held at private homes: the Benzian family at their Star Park Circle home; Bob and Gail Bardin at their First Street residence; and Dr. David and Mickey Hansen at the historic Hansen Mansion on A Avenue.

More than $75,000 was raised through donor solicitations; then sponsors, providing both financial and in-kind contributions came aboard, including a grant by the Coronado Tourism Improvement District for a dedicated trolley to connect hotels and the festival venues, and the City of Coronado, which provided a $50,000 grant.

Film festivals rely on a solid core of volunteers, so a volunteer recruitment session was held in October at the home of Denny and Holly Nappen, with 67 volunteers signed up for a dozen committees that day.

Space for a film festival office on Tenth Street was donated by Dennis and Maggie Holland, owners of Which Wich and Firefly Pizza, and the Coronado Eagle & Journal signed on to sponsor the Volunteer Central location that will operate during the festival. Blossom Sanger, in the name of her late husband George Sanger, agreed to sponsor the student awards.

The opening night reception will be held at the Hotel del Coronado in the Crown Room, with the Saturday night Celebrity Tribute dessert reception in the hotel’s Ballroom, and the closing night bonfire movie on Del Beach. That event will be open to the public (VIP pass holders will have access to premium seating). That bonfire movie will be a special surprise — an animated family film, procured by Gallagher of DreamWorks SKG Entertainment.

The awards night ceremony at the high school’s Performing Arts Center will follow an awards night reception for VIP pass holders, sponsored by the Thomas D. Lookabaugh Foundation. Awards will be small sculptures, known as “The Hubbell;” they were created by noted artist James Hubbell, who also designed Coronado’s signature fountain, Sea Passage.