For the first several years of his life, Trey Canete was plagued with a persistent, nagging wheezing that his parents couldn’t figure out. When he was three years old, he was diagnosed with an egg allergy and gluten intolerance, so his mother, Roanna Canete, immediately changed his diet. “Within 24 hours, Trey’s wheezing stopped completely,” said Canete. “It was pretty astounding.”

Shortly thereafter, the family moved to Italy — the world leader, according to Canete, in addressing and solving food intolerances. In Bologna, Canete enrolled in specialized gluten-free culinary programs where she studied cake decorating and chocolate and gelato making (the latter is naturally gluten-free). “My husband took four weeks off work to watch the kids while I learned to make gelato — he still talks about how my chocolate gelato was worth it!” said Canete, laughing.

Kitchens in Italy are very organized about facility processing and food preparation, Canete explained. “In fact,” she said, “many commercial facilities have two kitchens, one of which is entirely gluten and allergen free.” The country was a perfect setting for her to study gluten-, egg- and dairy-free baking and to stockpile recipes to eventually bring back to the United States. 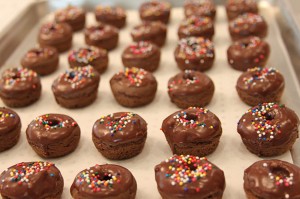 Humans evaluate food by three factors: taste, texture and appearance, Canete explained. “In Italy, food has all three,” she said. “However, I’ve found that the gluten-free industry in America hits the appearance factor, but the taste and texture are not there. And food distributors and eateries in the U.S. inflate the prices of gluten- and allergen-free foods because they know people with intolerances have to buy them no matter what.”

Furthermore, Italy has outlawed the use of genetically modified organisms (GMOs) in farming, so the wheat and ancient grains grown in the country are different — higher quality, said Canete — than those grown conventionally in the U.S. “I’ve seen people with celiac disease who can eat wheat in Italy with no issues,” she said.

Canete wanted to open her own café upon her return to the U.S. — where food intolerances and celiac disease are on the rise — and knew that she could bring good, wholesome gluten- and allergen-free food to America. When her husband’s job brought the family to Coronado in September 2014, she opened Coronado’s Gluten-Free Pantry, a wholesale bakery that provides lessons in effective gluten-free baking, consulting services to local hotels and restaurants on making and serving specialized food options, and handmade bagels, pastries, doughnuts and other desserts to local businesses. Canete also runs a sister company, Coronado Cake, which makes custom gluten- and allergen-free wedding cakes.

Canete’s biggest tip for making food that doesn’t skimp on taste or texture is knowing which gluten-free flours (such as coconut, brown rice and oat flours) work best when it comes to the necessary density of a food. For example, Canete explained that to get the right taste and texture in a bagel, there are particular gluten-free flours that work better than others — and it’s a matter of knowing which ones.

“Friends sometimes worry about my business, wondering if I’ll lose clientele when the next fad diet comes along,” said Canete. “But avoiding food that makes you sick is not a fad diet — it’s a lifestyle choice. Whether my clients come to me because they have serious food allergies or because they simply choose to eat gluten-free, they trust me with their health — and that feels good.”