From its earliest days, gardening in Southern California was a novelty. With lots of sunshine and a temperate climate, almost everything grew — and grew well. While most other areas of the United States had limited growing seasons (even Florida had cold snaps), Southern California was heralded as a place where hothouses were unheard of and lemons grew year-round.

As a result, California earned a reputation early on as a gardening paradise (Spain’s Franciscan fathers, the area’s first European settlers, had brought in olive, pomegranate, palm, and pepper trees). By 1863, 13 years after California became a state, agriculture had increased and this description from The Resources of California was typical: “Luscious fruits, of many species and unnumbered varieties, loaded the trees. Delicious odors came from all the most fragrant flowers.” By 1870, Southern California was well established as a fruit-producing, flower-growing region.

By 1892, San Diego was considered one of the most beautiful cities of its size in the nation … it had attained, in the space of a few short years, a reputation as a city of gardens.

Coronado, particularly, became noted for its horticultural beauty, with its avenues lined with palms and cypress and its parks and gardens filled with the rarest flowers and shrubs.

In fact, many visitors who traveled to California to see for themselves what a year-round, flower-filled wonderland was like (roses, in particular, were plentiful)  were unwilling to return to their summer-only garden habitats. Thanks to Southern California’s inexhaustible sunshine and virgin soil, even the most inexperienced gardener could be ensured a certain amount of success. This infiltrated the consciousness of ornamental gardeners around the country, as reports of “profuse plantings of every hue, fragrance, and form” were said to distinguish California’s most humble dwellings. As a result, residents at every income level were introduced to the idea that a plot — or just a pot — of pretty flowers was something worth pursuing. It didn’t hurt that Southern California’s wildflowers were prolific.

Meanwhile, the area’s larger estates — with acres of land and gardeners galore — could support the kinds of grounds that rivaled public parks in the East and helped create a regional market for more and more exotic species. It’s no wonder that Southern California gained a reputation as a modern-day Garden of Eden.

Even so, many of the state’s earliest residents were unfamiliar with the kinds of trees and flowers that could be grown in Southern California’s mostly Mediterranean climate. As a result, local horticulturists were essential in educating the gardening populace. In San Diego, Kate Sessions, a Berkeley-educated botanist, emerged as one of the state’s premier garden educators (among other things, Sessions helped found the San Diego Floral Association shortly after the turn of the century).

Sessions was also instrumental in the development of Balboa Park. She agreed to plant 100 trees a year in the park, which was then known as City Park, in exchange for leasing land for her nursery around the turn of the century. Sessions also had a nursery in Coronado, with her foremost client being the Hotel del Coronado.

The 1915 Panama-California Expo-sition in Balboa Park, celebrating the completion of the Panama Canal, brought the world’s attention to the rarity of Southern California trees, shrubs and flowers. It also inspired area residents to spruce up their own yards, furthering the idea that in Southern California even average homeowners had above-average gardens.

The Southern California lifestyle is born

Because of the area’s temperate weather and beautiful gardens, residents in Southern California tended to enjoy informal out-of-doors socializing, and, as a result, many San Diego houses sported porches, courtyards, arbors, verandas, and gazebos. The idea of living outside had been a way of life in Southern California from the very beginning: Mexican rancheros included rambling homes, built around courtyards with lots of exterior doors, setting the stage for the year-round inside/outside lifestyle for which California became famous. That the Hotel del Coronado had the first electrically lit, outdoor Christmas tree in the country in 1904 speaks to the fact that, even in the early days, Southern Californians saw their outdoor areas as an extension of their indoor space. 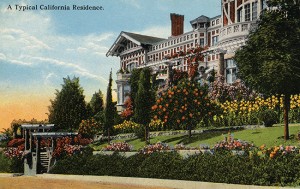 Interestingly, some credit Frederick Law Olmsted (1822-1903), who co-designed New York’s Central Park and hailed from the Northeast, with helping to create the uniquely California-inspired landscape aesthetic. According to The Golden Age of American Gardens by Mac Griswold and Eleanor Weller (1992), “Olmsted was almost Californian in his belief that his gardens should allow people ‘to carry on daily life in the outdoors.’ He supplied ‘outdoor apartments’ by means of terraces, lawns, hedged enclosures, and walled gardens.”

The design of California’s early bungalows — low in profile, with generous eaves and enclosed patios — helped make the most of the region’s inherently indoor-outdoor way of life, as extolled by Craftsman magazine: “The house, the garden, the terrace, the patio, the open porch are all one domain, one shelter from the outside world.”

By the 1920s/1930s, California architects (notably San Diego’s Cliff May) followed in Olmsted’s philosophical footsteps by designing “ranch houses” as a way to bring the outside in, incorporating single-story design (closer to the ground), U- and L-shapes (perfect for patio areas), large windows (for light and views), sliding glass doors (easy access), and front porches. Relaxed and unpretentious, this uniquely American style of architecture took America by storm after World War II and set in motion a nationwide preference for the “California ranch” and the laidback, outdoor lifestyle it fostered.

Christine Donovan is historian at Hotel del Coronado, where she has authored seven books on the resort’s history.