When it comes to living healthfully, the pursuit is about both the journey and the destination. These Coronado locals have grabbed the bull by the horns and taken strides — quite literally — toward healthier, happier lives. And they’re loving the rewards every step of the way.

Bill Gise was a widower of seven years when one of the many organizations he’s involved with, the Make-A-Wish Foundation, asked him to participate in their bachelor’s auction fundraiser. That night, Martha Kuenhold, a divorcee of 20 years who had not dated anyone since the split, bid on Bill and won a date with him for $200. “He took me for Chinese food at 99 Ranch Market for our first date,” Martha said as they both laughed.

Less than a year and a half later, just after Thanksgiving of 2014, the couple was married in the gazebo of Spreckels Park, across the street from Martha’s condominium. “All our family was in town for the holiday,” said Martha, “so we walked over and just did it.”

Then came the news of Martha’s daughter’s engagement and upcoming nuptials the following July in Iceland. The soon-to-be mother of the bride made it a goal to lose some weight for the wedding — and her new husband jumped on board. The couple began using the Medifast program, which entails five provided meals a day along with snacks and energy bars, and one meal they cook themselves. The couple eats a lot of fish, chicken and salads and they cut out most refined carbohydrates. “A lot of our success and the fact that it felt pretty simple and easy was because we support each other. We are in this together,” said Bill. Since they began the weight-loss program, Bill has shed 35 pounds and Martha has lost 20.

“But you know,” said Martha, who’s 64, “I realized it’s really not about losing the weight. It’s about how we feel. We are so much more youthful and mobile. Being fit is critical to entering your more senior years. If you’re not active now, it’s not going to get easier. “I don’t want to be 66 and be gasping for the nearest elevator.”

The couple takes lots of walks together around town. “We live in paradise — it would be silly not to,” said Bill, who’s 73. Martha joined the Gym in Coronado and works with a trainer, who, she said, keeps her in check. “I’m pretty lazy. If I didn’t have someone pushing me I probably wouldn’t do it.”

Despite the initial goal of losing weight, the couple said their new healthy eating and exercise regimen has become more of a lifestyle. “Feeling good and eating well makes you feel happier,” said Bill. “It sounds trite, but it’s just that simple.” And it’s their partnership — keeping each other accountable, sharing healthy diet and exercise, and planning for the future together — that really keeps them young at heart. “We’re planning a lot of trips for those sunset years,” said Martha. “And we’re not thin or picture perfect, but both of us are pretty darn healthy. And very happy.” 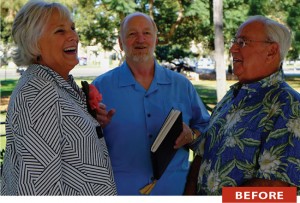 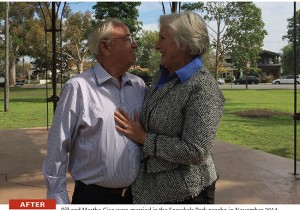 Bill and Martha Gise were married in the Spreckels Park gazebo in November 2014. The couple has since lost more than 55 pounds together through diet, exercise and a supportive partnership.

How hot yoga is helping one man get his mobility back

At the age of 17, Luke Urtnowski began showing signs of balance and movement problems. Shortly thereafter he was diagnosed with Friedreich’s Ataxia — a degenerative disorder that causes progressive damage to the nervous system. It was a grim prognosis as the life expectancy for someone afflicted is about 24. “At the time I was very active on my high school swim and cross country teams,” said Urtnowski. “I had a hard time believing my health would deteriorate so much.”

By the time he reached college, Urtnowski’s health problems had progressed to such a degree that he required a motor scooter for mobility. However, as years passed, his degenerative issues didn’t seem to follow the diagnosis. After a frustrating process of re-testing, doctors determined he had been misdiagnosed, but were unable to offer any other diagnosis or explanation to what was happening to his body. “At that point I felt like I was at such a loss.” Urtnowski said.  “I pretty much gave up on Western medicine.”

Just over a year ago, Urtnowski, now 38, was convinced to try Bikram yoga at Coronado Hot Yoga. The practice involves a 26-posture series over the course of 90 minutes in a 104-degree room with about 40 percent humidity. After using his scooter as his primary mode of transportation for nearly two decades, Urtnowski’s legs had significantly atrophied. “I had my doubts,” he said. “But with a lot of modifications to the postures I found it to be doable. The series of poses really helps with circulation and, after some time, I began to see subtle changes in my legs.”  Since beginning the practice, his legs have been able to support more and more weight.

He’s now able to use a walker and even takes a daily walk along the street outside his home on A Avenue. His activities also include Pilates, swimming and biking.

“It’s very empowering to take matters into your own hands and not rely on some magic pill or easy fix (which may or may not come) to cure what ails us. Part of me feels as though I wasted time looking for a cure when all along I had the ability to heal myself from within. Growth comes from taking charge to better yourself and realizing there’s no better person to do it than you,” he said.

True to his advice, Urtnowski is currently training for a triathlon with the Challenged Athletes Foundation in October. “The road to recovery is a long one,” he said. “But I can’t wait to see what the future holds.”

One step at a time

When Jill Powell’s 16-year-old son left for a Rotary exchange program in Italy last June, his 100-pound chocolate lab, Bernie, was in need of a new walking buddy. So Powell strapped on her walking shoes and simply started out with her furry friend — and on their very first stroll together they went six miles.

Powell found it refreshing and fun — a welcome part of her day that soon became ritual. And at home, she began making healthier eating choices (an easier feat now that she was no longer cooking for a teenage boy), such as eating more fish and salads and foregoing breads and pastas.

Before long, she found herself walking four to six miles in the morning, and then venturing out again in the afternoon for another three to four miles — sometimes hitting as many as 12 miles in a day. Within the first three months of her new routine, Powell had shed 35 pounds.

“Though my dog is very tired at the end of the day, I find I have so much more energy! I am addicted to walking — it’s something I look forward to doing every day,” said Powell.

Last summer, Powell also began sailing sabot boats with an adult program at the Coronado Yacht Club, where she was pleasantly surprised by a motivating factor: “I could go a lot faster since I was skinnier!” she said. She also joined Coronado Fitness Club and began taking five classes a week there, including spinning, weight training and Zumba.

Since her initial push to lose weight, Powell has taken a more moderate approach to her diet. “I don’t hold back from having fun,” she said. “If I go to a restaurant, I eat the bread. And when I visit my son in Italy, I will definitely be having pizza!”

Even after mellowing out on her diet a bit, Powell is down 55 pounds and still logging around 10 miles a day and frequenting the gym. She just completed her first 10K on Valentine’s Day and hopes to complete a half marathon soon. “I’ve got about 15 more pounds to go, but I’m not in a hurry. It’s a lifestyle, and I feel great!” 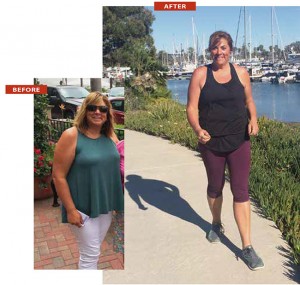 Jill Powell started taking long walks last summer to give her dog some exercise. She now walks about 10 miles a day and has lost more than 50 pounds.