When Jonathan Goldwasser and Carol Roizen’s daughter Michelle was diagnosed with a rare disease needing specialized treatment just under a decade ago, the Mexico natives moved to the United States. With Michelle’s health in the hands of her physicians, the couple wanted to help in the every way they could. Believing healthier food could be the key to recovery, they began changing her diet. “My wife began researching how to medicate her through food,” Goldwasser said. “We really believed in the power of food to make her  better.” Roizen studied nutrition and became a health coach and the couple began adding fresh fruit and and vegetable juices to Michelle’s diet. “Very soon after,” Goldwasser said, “we saw her become stronger and better. Ten years later, she’s doing amazing!” 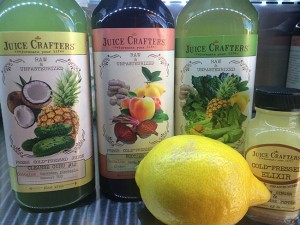 After the experience, the couple decided to spread their knowledge — and healthy juices and tonics — in their community. They opened their fifth location of Juice Crafters in San Diego County on Orange Avenue in November 2015, where they serve an array of cold-pressed juices, wellness shots, juice cleanse programs and acai bowls. Cold pressing with a specialized machine is regarded as the healthiest way to consume juice; the process maintains much higher levels of vitamins, minerals and phytonutrients that heat pasteurizing can strip away.

“People are different than they were 20 or 50 years ago, when we weren’t aware of how eating can significantly affect our health,” said Goldwasser. “We know now that sickness comes from what you put in your mouth.” Everything on the Juice Crafters menu is all-natural, vegan, with no sugar added. They also use mostly organic ingredients (all greens and all superfoods such as chia, spirulina and cacao are certified organic). And though many of Juice Crafters’ locally sourced farms cannot afford costly organic certifications, they do guarantee everything is pesticide-free and non-GMO.

“Everything on the menu is there for a reason, and there’s something there for everyone,” Goldwasser said. Among the many superfoods offered, patrons will find ingredients such as turmeric, which, Goldwasser explained, is a powerful antioxidant and, if eaten every day, is “the best thing to prevent cancer.” Research suggests that the active ingredient in it, curcumin, has numerous anti- inflammatory properties. It’s also been shown to break down amyloid-beta plaques — hallmarks of Alzheimer’s disease. Wheatgrass is another popular item that boosts immunity, supports the liver and detoxifies the body, and according to Goldwasser, is recommended by physicians for patients undergoing chemotherapy. It’s very high in polypeptide proteins, which the body efficiently breaks down for use in the blood stream and tissues. It boasts the full spectrum of B vitamins and is packed with tons of vitamin A and C as well as calcium, phosphorus, magnesium and potassium.

Juice Crafters also offers cleanse programs that can be done for any number of days; each day of a juice cleanse entails eight different juices. Roizen worked with a team of nutritionists to come up with the daily juice regimens to ensure participants still receive all the vitamins and nutrients the body needs.

“Some people do cleanses to lose weight,” Goldwasser explained. “But that’s really not the reason to do one. Even just one day of a juice cleanse is a powerful way to reset the body and allow it to detoxify.”  The theory behind juicing is that when our bodies are freed from the burden of digesting solid food, they can more efficiently process and expel toxins — all while the nutrients present in cold-pressed juices keep the body well-fed. Goldwasser, who recommends not doing a cleanse for more than three days, likens the experience to the opposite of a meal at McDonald’s: “One meal at McDonald’s and you feel sluggish a few hours later — versus the energy boost you get from a cold-pressed juice. Try it,” he suggested. “You won’t believe how you feel. When you put good things into your body, you’re healthier. It’s as simple as that.”