Bill Pavlacka grew up in central New Jersey — far from the seashore and sandcastle territory.  But the Sandcastle Man, as many know him today, moved to San Diego in 1982 and became an instant beach lover.

More than 30 years ago, Pavlacka started building sandcastles with his four children (the oldest of the group was three, then) as a way to pass the time during their many beach trips. What began as simple bucket castings and drip castles slowly evolved. “As my kids grew up, we learned how to build together. Over time we pushed ourselves to make more and more complex structures and we just got better and better,” said Pavlacka.

Pavlacka, who was a construction worker by profession, has always had a knack for building things. Eventually he added models of actual European castles and famous landmarks — such as Arches National Park, the Eiffel Tower and the Statue of Liberty — to his seaside repertoire. To build his works of art he uses around 10 yards of sand; his structures are anywhere from seven to 10 feet and take an average of six to 12 hours to build, which he often does in one sitting. The sand edifices can last as long as three weeks if left undisturbed.

As his structures required more and more specialization, Pavlacka discovered Coronado Beach, which, he says, has the best sand — fine and clean — for building castles. He especially enjoys the space outside the Hotel del Coronado. “It’s such a busy spot. I get the most spectators there,” he said. In 2009, Pavlacka retired from construction and began building castles professionally. He often constructs them to include marriage proposals, or he builds sand fire pits and other structures to grace beachside weddings or events. Many of his castles commemorate holidays and spread messages of love. He works in front of The Del most days, except on Wednesdays and when he gets a commission to build a castle elsewhere.

As many a beachgoer knows, building with sand is, of course, not without its setbacks. The elements can sometimes be unpredictable, and even one minor flub can send a whole structure tumbling down. In summer of 2015, he and his two sons were competing in the U.S. Sand Sculpting Challenge in downtown San Diego (Pavlacka won the event in 2012). On the second of the three days, the trio was working on an elaborate castle and the main tower of the structure completely collapsed. “Most of the work we had done up to that point was ruined, and we had to work fast to get the sculpture to look presentable,” said Pavlacka. The trio didn’t place that year, but they did win the three-man division in the Imperial Beach Sun and Sea Festival in both 2014 and 2015.

As summer approaches, Pavlacka shares some tips for the amateur sand sculptor: “Use plenty of water, mix it really well with the sand, and pack it as hard as you can. When you’re shaping the structure, scrape away sand, very little at a time, to start making the shapes you want. It’s much easier to take more off than to add back on.”

Pavlacka, who spent part of April on vacation building sandcastles with his grandchildren (4 and 6 months), finds as much joy building sandcastles today as he did more than three decades ago. “I love being at the beach. I’m always pushing the envelope to get better. I like to just clear my mind and get in the zone — and I really enjoy the art of it.” 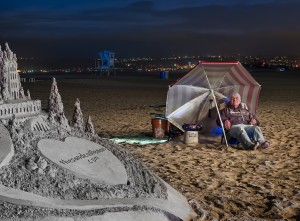