One fact of life about living in a community where homes are in close proximity is that, for better or worse, you really get to know your neighbors! Fortunately, in Coronado, most neighbor relations are “for better,” often the result of recurring small gestures of friendship. Here are some locals’ “good neighbor” stories:

“I moved next door to Tess in 2007 and despite our 55-year age difference we were instant pals. We talk on the phone, leave notes at each other’s doors (which we call ‘d-mail’) and get together almost every week to have a drink or dinner. I love her stories and wisdom, and admire her consistent positive attitude. She is amazing. Over the years our friendship has grown and now we claim each other as honorary family. It’s a genuine and special relationship that I treasure.” ~Alisa Kerr 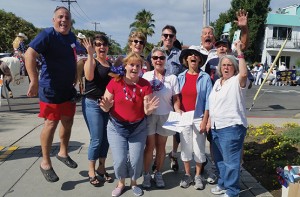 “We live on D Avenue near First Street and are surrounded by a number of gracious, wonderful neighbors who feel more like family. When I was sick and my husband was traveling, one neighbor made and delivered vegetable soup. Our other next-door neighbor used to walk his dog at 7 a.m. each day and give our dog a treat on the way. My dog would wait patiently at our fence for him to walk by. And even though his dog passed away months ago, my neighbor still gets up and brings my dog bones each morning. Another neighbor brings us cut flowers every week and yet another often treats me to plays at Lamb’s Players Theatre. All of us in the surrounding area celebrate major holidays by decorating our homes (with a little friendly competition here and there), and we even volunteer together on the parade committee to judge the floats every Fourth of July!” ~Genevieve Knych-Rohan 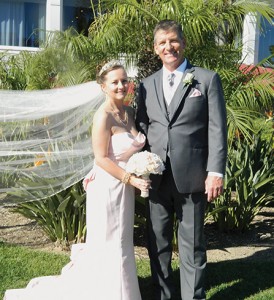 “I lived in Navy housing from 1979 through 1983 and was a student at Coronado Middle School during the spring of 1981 when Ben Miller, who was two years older, moved into the house four doors down. I noticed him immediately. When I found out he was going to be the drum major at Coronado High School, I joined the drill team as soon as I got into high school so I could hang around him. Finally, by the end of my sophomore year (Ben’s senior year) he started to notice me, too… just as my family was being transferred to Washington state. We wrote to each other for a couple years but then lost track. Twenty years later, in the summer of 2013, I was living in Arizona and happened to be on Facebook, looking at pictures from Ben’s class of ’83 reunion. I noticed a comment on a post made by one Ben Miller, and with a pounding heart, sent him an instant message. Turns out he’d been looking for me, too! Eleven months later, I moved to San Diego and, one week after I arrived, Ben proposed to me on Coronado Beach. We were married in January 2015 in front of many of our CHS classmates. I got to marry the boy next door!” ~Melissa Miller

“I’ve been neighbors with most of the same people for the 16 years I’ve lived at Crown Hill Terrace at Orange and D. At this point, we’re not just neighbors — we’re family! We watch each other’s children, celebrate together, grieve together and support each other. We often gather in the courtyard to make s’mores, laugh, and enjoy each other’s varied life experiences. Our Crown Hill Terrace family comes with unconditional love — through it all, we have each other’s backs.” ~Lance Howell

“For years, I’ve come home to special treats on my doorstep: little mason jars of handmade herbal bath scrub with cheery notes, yummy homemade treats, and most recently a colorful paper with Lifesavers attached to it. I could never figure out who my ‘secret pal’ was, and somehow the jars always had a way of appearing when I was having a difficult time and they really made my day. Turns out, it’s been my eight-year-old neighbor, Olivia Gorken. Her mom, Rachel, tells me Olivia does these sweet gestures quite often for her neighbors and people in her church, just to tell them how great they are.” ~Kel Casey

“I grew up in Coronado with five sisters and one brother. Through our lives, we’ve all lived in many other cities all over the country, but today, two of my sisters live in the same eight-unit complex as me, and another sister lives only three blocks away. We love to get together for potluck dinners and game nights, take water aerobics together several days a week, and vacation together. Together, we’ve mourned the passing of our sister, Beth, as well as our parents; last year we joined forces to help relocate my brother to an apartment in Chula Vista as we prepared to sell the family home we’ve had since the ’60s. It’s been a great help to tackle these emotional events together. What a blessing to have my family so close they are also my neighbors!” ~Susan Stocker

“When we have lemonade stands on our block, people always stop by and give us $5 and ask us to give the next person a cup of free lemonade. Three men in uniform – two military, one police officer – each gave us $5 so we could give others a cup. It makes me really happy to be part of this neighborhood.” ~Zoe Watwood (12)

“At the very end of the day there was a lady that was tired and hot from walking and she wanted lemonade but since she was just out on a walk she didn’t have any money with her. We gave her a free cup and she was so happy! It made us feel really good.” ~Jane Watwood (9)