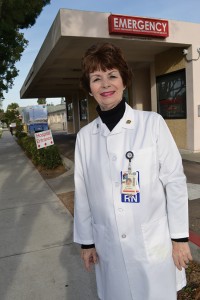 Soroptimist International Coronado’s 14th annual Legends Luncheon honors this year’s Legend, Cathy McJannet. The group’s signature fundraising event raises money to help improve the lives of women and girls in our community and throughout the world.

The Legend award recognizes outstanding women who devote their time to community service and charitable organizations. Helping and mentoring young women has been a large focus of Cathy McJannet’s life.

Born in Halifax, Nova Scotia, the former Cathy MacDonald was one of five children, the daughter of a teacher who left the profession to raise her family, and a father who worked for General Motors.

The young family moved to the province of New Brunswick, where Cathy became the first teen to achieve 500 hours as a hospital volunteer at Moncton Hospital. Spurred on by the rewards of her volunteer work, she earned her RN degree a few years later at Moncton Hospital School of Nursing and then obtained a bachelor’s degree in nursing from the University of Ottawa, and a masters in nursing from the University of Phoenix.

The couple married in 1979 and moved to Coronado in 1990 when Larry was posted here through the Canadian Armed Forces, part of an exchange-posting program among allied countries. Cathy became an emergency room nurse at what was then Coronado Hospital.

In 1993, just when they were due to return to Canada, Larry was offered a job at the Canadian Consulate in San Diego as an International Trade Officer, and they have remained here ever since.

Married for 37 years, the McJannets have a son, Ian, 34, who is a manager at Kaiser Permanente in San Diego. Ian attributes his choice to work in the health-care industry to his mother’s commitment to helping others and making people healthy. “I still haven’t met anyone like her or anyone who compares to her,” he confided, adding that he has always been struck by his mother’s selflessness and ability to enrich people’s lives.

Believing in lifelong education throughout one’s working life, it was only natural for Cathy to become a teacher. “A turn in my life occurred when I became a nursing professor at Southwestern College,” she said. “I love teaching and I now had the opportunity to pass my knowledge and passion for nursing on to the next generation of nurses.”

Cathy’s achievements as a teacher were recognized with awards in 2000 and 2003 when she was named UC San Diego Extension’s Outstanding Instructor of the Year.

Today, Cathy is director of Nursing and Health Occupation programs at Southwestern College, comprised of eight programs including registered nursing, vocational nursing, and operating room training. Going from teacher to administrator “was a challenge for me, but I have found ways to still have my moments of teaching,” Cathy said. “I now impact nursing from a different perspective.”

For example, Southwestern College nursing students receive an associate degree when they graduate, and Cathy developed a program where students can concurrently get their bachelor’s degree from San Diego State or Point Loma Nazarene, which both offer courses at the Southwestern campus.

For 27 years Cathy has been an emergency room nurse at Sharp Coronado Hospital, and for a good part of those years she has been a faculty member at UC San Diego Extension and a Healing Touch instructor at Sharp Coronado’s Sewall Healthy Living Center.

Susan Stone, Sharp Coronado’s senior vice president and CEO, credits Cathy, who was named the Emergency Nursing Association’s Certified Emergency Nurse of the Year in 1999, as being “one of the nation’s best emergency department nurses.”

Through her multiple rolls as nurse, teacher and administrator, “Cathy has continued to provide the best in clinical care to our Coronado residents,” Stone added. “It is an honor to work alongside Cathy who continues to be a cherished mentor, trusted colleague and friend.”

As director of Nursing at Southwestern, Cathy was able to bring a higher level of excellence to the program through her role as a program evaluator for the Accreditation Commission for Education in Nursing and now serves as board chairman of that organization. “This afforded me the chance to visit nursing programs around the country and to see the excellence in nursing education that is being provided nationally.”

Last year, she opened Cathy’s Closet at Southwestern College to provide professional clothing for young women in financial need seeking employment. (A few items for men are also available.) She has also been instrumental in preparing students for the job market, including bringing in professionals to conduct mock interviews. Involved in community outreach through Southwestern College since 2000, she regularly attends workshops and career fairs and speaks to young women on the challenges and the joys of a nursing career.

Cathy developed a grant through the Coeta and Donald Barker Foundation in 2010 that provides full scholarships to 16 nursing students annually, 85 percent of whom are single women in financial need. She has raised approximately $50,000 for San Diego Emergency Nurses Association for nursing scholarships.

“Our Coronado chapter is amazing!” Cathy said. “We provide thousands of dollars every year for scholarships and grants to a variety of organizations that work with young women in need. I continue to be amazed at how many ways Soroptimist International impacts the lives of others and in such a positive way.”

Tickets are $80 per person; info at: coronadosoroptimist.org