Influenced by everything from Uber to Airbnb, home design reflects the times in which we live.

Once a year, more than 10,000 builders, architects, appliance manufacturers and others involved in the homebuilding industry gather for the largest homebuilding conference and trade show in the Western United States — PCBC. This June, PCBC was held at the San Diego Convention Center.

One over-arching fact emerged from four days of home tours, industry panels and a trade show of the latest appliances and building products: technology is changing rapidly, and so are the consuming habits of potential homebuyers. Twenty-nine percent of Americans now live alone (compared to 9 percent in 1950) and Millennials are marrying later and define themselves more by their experiences than the square footage of the home they own (or don’t own — another very real option today).

Here are some trends and products that are coming your way — and some are already being integrated into Coronado homes by some of our region’s savviest architects and builders:

New Samsung refrigerators come with three interior cameras that snap a photo of the contents each time the frig door is closed. So, if you’re at the store and can’t remember how much milk is in the carton, you can see view the latest photos from your phone through a nifty ap. But Rice points out that luxury manufacturers such as Sub Zero are moving cautiously, lest they develop technology that is obsolete in three to five years. A recent Wall Street Journal story notes that while voice recognition is in development at Sub-Zero, so far the company has dodged several high tech gadgets. “We’re really struggling to find something that’s of real value versus, I’ll say, gimmicky,” says Paul Sikir, vice president of design engineering for Sub-Zero.

Whirlpool’s Scan-to-Cook ovens allow the user to scan the UPC barcode on a food package in a Whirlpool mobile app and the Scan-to-Cook technology does the rest, even alerting you via cell phone when the food is ready.

One ADU option that was on exhibit at PCBC was a “Flex House,” manufactured by Shelter Dynamics in Ridgecrest, Calif. Pending final approval from the state, which Shelter Dynamics expects to secure in January, the pre-fabricated homes can be delivered to homeowners in two main pieces and provide 720 square feet of interior living space.

As I walked through the Flex house, I was impressed with the open and airy yet solid feel of its construction. Containing a living room, dining area, full kitchen, and bedroom with walk-in closet, it also included a washer/dryer and dishwasher, solid wood cabinets, and solid oak floors. Shelter Dyanmics CEO Mark Gautraux said the homes were conceived by his partner Jim Gregory whom he called a visionary; Gregory died in May following a battle with cancer. “He developed one of the first residential solar power communities in California in 1984, and he knew that Millennials and Baby Boomers wanted to live in smaller footprint housing,” Gautraux said.

The Flex house can be delivered in two pieces and moved into a backyard either through a gate or via a crane. Prices begin at $85,000, including installation; extra charges include laying a foundation, securing permits, transportation from Ridgecrest, and crane rental, if necessary.

For many builders and luxury-seeking homeowners, it’s out with the tub and in with a large shower that can be built in a variety of configurations that combine a series of showerheads and body sprays mounted on the walls and ceiling. There is even the option for electronic controls, allowing the user to preset sprays, temperature, music, steam and water use.

A cloud-based, app-driven “U by Moen” digital shower offers Wi-Fi mobile connectivity and allows consumers to customize settings directly in the shower and save them with preset buttons. The app enables users to create up to 12 presets including name, temperature, shower timer, and notifications. By syncing their Smartphone to their shower, users can start and stop remotely. U by Moen features a warm up and pause function, allowing users to save water by having the shower pause once the water has reached the desired temperature.

A Hawaiian-style home (also shown on our cover) that was finished this year, embodies several of the latest housing trends. Designed by architect Kevin Rugee and built by Qualcraft Construction, the project was a complete re-build including home, pool, pool house and guest house, for clients who were a retired couple and wanted to keep the home to a single story.

Qualcraft interior designer Dominique Tharp suggested that trusses be added to the original cove ceiling in the “great room” to create a raised hipped ceiling. “We added the beams and lauhala matting, which are very common Hawaiian design elements,” she said. She also designed a tri-level island, where the homeowners could sit to eat at table height, have bar seating for guests, and plenty of working counter space.

The home was designed to be a smart home, with solar panels, and an entire home system for lighting, music and security that can be controlled by an iPad or smart phone. “This is a very popular trend that I don’t see slowing down, but we actually don’t yet get a lot of opportunity to integrate this kind of technology,” Tharp noted. “Most of our projects are vacation homes and homeowners don’t often find value in the added expense with a vacation home.”

This Hawaiian style residence on Glorietta Boulevard features many of the attributes today’s homebuyers have on their wish list, including an open concept living area, versatile kitchen island and sight lines that extend from the front door to the back yard, creating a relaxing indoor-outdoor viewscape and ambiance. 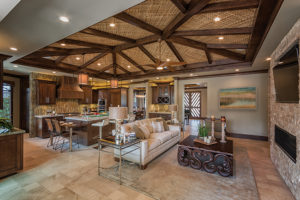 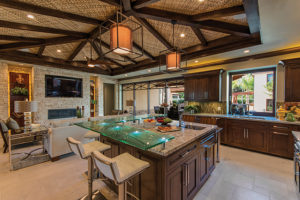 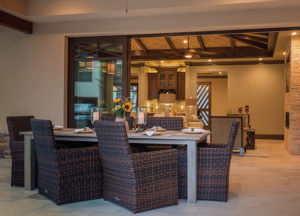