Imagine finding your way across a continent in an era that predated the Federal Highway System. It was a time when “roads” might refer to unmaintained dirt logging trails and where paved streets were few and far between. But the unknown horizon was part of the allure for Hotel del Coronado founder Hampton Story, who motored across America over a century ago, long before GPS, cell phones, directional signage and most maps.

Postscript: According to the Federal Highway Administration, in 1913, the Lincoln Highway Association was formed to address the need for a paved east-west highway. The group, named in honor of President Lincoln, elected the president of the Packard Motor Car Co. as head of the organization. At the time, there were no quality long-distance roads in the United States. The fledgling organization raised an initial $4 million in order to begin the building of a coast-to-coast highway. A primary model section was built south of Chicago, which successfully brought awareness to the public about the need for better roads. President Woodrow Wilson brought further attention and support to the effort when he explained that it “threads various parts of the country together.” The Lincoln Highway is now known as U.S. Route 30.
Christine Donovan is director of Heritage Programs for Hotel del Coronado, where she has authored six books on the hotel’s history. Information and photos for this article were provided by Hampton L. Story’s great grandson, Peter Story. 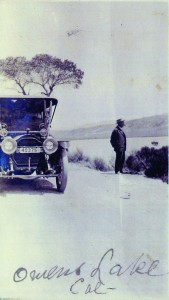 Hampton L. Story surveys Owens Lake in California. According to his trip diary, the Packard was outfitted with oversized tires, including two spares and, “On reaching Chicago, two of the tires still had California air in them.” 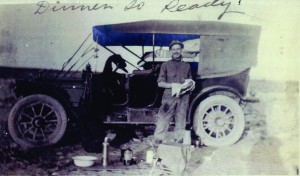 Story’s driver and travel companion, John Loef, poses with his makeshift kitchen. The 1911 cross-country trip was physically demanding, and Story’s appetite increased proportionately (“Reminded me of my boyhood days,” he wrote in his diary.) Along the way, the men prepared hearty breakfasts of ham, eggs, pancakes and coffee, as well as campsite dinners. 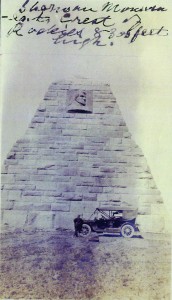 Erected by the Union Pacific Railroad Co. in 1882, the 60-foot Ames Monument in Sherman, Wyo., once marked the highest elevation of the transcontinental railroad (8,247 feet). In 1901, the railroad moved the line, but the monument – designed by eminent architect Henry Hobson Richardson and featuring medallions by acclaimed American sculptor August Saint-Gaudens – remained.