When Disney’s Beauty and the Beast plays at the San Diego Civic Theatre this week, Dance Captain/Swing Hayley Palmer will be on home turf. 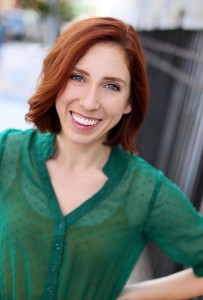 Palmer, who grew up in Vista, is with the equity tour of Beauty and the Beast, presented by Broadway San Diego. The graduate of Mira Costa College where she majored in theater last appeared at the Civic in 2006 when she was part of California Ballet’s production of The Nutcracker.  Since then, Palmer has racked up an impressive number of dance and acting accolades, after graduating from University of California Irvine with a bachelors degree in drama; she also received an MFA in acting from the school, ranked as one of the top ten college theatre arts programs in the country.

As Dance Captain/Swing with Beauty, Palmer is in charge of keeping all aspects of the show’s choreography fresh.

“For the most part Beauty and the Beast is fairly consistent,” she said in a recent phone interview from Los Angeles, Beauty’s previous tour stop.  “But once Matt West [choreographer] leaves, I’m in charge.  I keep a book with all the information and once the creative team leaves, they leave it to us to maintain. In rehearsals, I need to stay on top of all choreography.”

Palmer needs to make sure that all actors are hitting their marks precisely, not only for the look of the show, but also, she stressed, for safety.

“There is this one scene in Beauty that we call ‘Gaston.’ It’s huge with complicated choreography where we are clinking heavy metal mugs; it can be dangerous if people aren’t paying attention or following the exact choreography,” she said.

“I don’t think many schools teach how to be a swing or dance captain,” she said of her position.  “The first time I agreed to do it, I was feeling like I was thrown in the deep end.  It’s something you just have to figure it out.

To maintain the fresh look of the show, Palmer usually sits in the audience, to get their perspective.  “I watch from front, the back and the ring,” she said.  “The only time I don’t watch is when I am a swing. “

As a swing, she is the female understudy for all dancers, replacing a dancer who might be ill or injured or have a family emergency.  And should a dancer need to be permanently replaced in the show, it is Palmer who trains the replacement on all the dance steps.

“We may have a ‘swing out’ in San Diego, where the swings replace cast members,” she said.  “Some of my teachers from Mira Costa are coming and I’d like it if they could see me dance.”

This is Palmer’s second 10-month tour with Beauty, which has had a five-year tour run to date.  She’s not sure what her next gig will be, but she would like it to be in New York.  She’s love to join a Broadway show.  “Dancers have very short careers,” said the 26-year-old.  “I’d like to play this out and see where it goes.”

She’s also drawn to what she considers a recent movement of “provocative physical theater work” that she said originated in England and is becoming more mainstream in America, particularly on New York stages.  She points to a favorite play, “A Curious Incident of a Dog in the Nighttime” that embodies the trend where “dance and acting are one and the same.” “It’s collaborative and original,” she said.  She is reminded of one of her UC Irvine teachers, Annie Loue, who teaches movement classes, and her training in Grotowski theatre work, which places an emphasis on physical acting rather than sets and costumes. “These classes allowed me to take all my dance training and let it expand into exciting realms that I didn’t know were there.”

Palmer has also done her share of acting, beginning with a part in Brokedown Palace in 1999. Blake Lively’s parents came down to the Coast Theatre where I was taking acting.  They liked me and invited me to come up and take some classes.  I was only 8 or 9.   It was at those classes where she was recruited for the part of Heidi in the film that starred Claire Danes.

She’s been a Screen Actors Guild Member since 1998 and is on her way to being an Actors Equity candidate.

“I love what I do,” Palmer said.  “It’s challenging and fulfilling.”

Beauty and the Beast runs Nov. 24 – 29; tickets can be purchased at www.broadwaysd.com