All his life Edward Bloom has told stories – big stories about mermaids, giants, witches and one very large catfish. But now, his son suspects that behind all the stories something much bigger is hiding.

Shakespeare’s romantic comedy is the story of two couples struggling to salvage true love in the face of deception. The witty banter between Beatrice and Benedick makes them one of Shakespeare’s most beloved pair of lovers. As part of its 21st free Shakespeare series, the play is grant funded and admission is free.

Through Sept. 23 C3 Art Gallery Exhibit: Six in the Summer

Featuring the works of local artists Tina Christiansen, Charlotte Stubel, Jim and Glory Palecek, Mary Hale and Dolores Forsythe, the exhibit is free and items can be purchased. Held in the foyer of the Nautilus Room at the Coronado Community Center (1845 Strand Way). coronadoARTS.com

The Coronado Chamber of Commerce’s annual board installation event honors Coronado’s Police Officer of the Year, Firefighter of the Year, Lifeguard of the Year and Volunteer of the Year, as well as the Coronado Annual Business Awards and the Lewis R. Hardy, Jr. Memorial Award. The event features a showcase of local chefs, live music, prizes and cash bar. Nautilus Room at the Coronado Community Center, 1845 Strand Way; 5–8 p.m. Tickets, $50
(619) 435-9260 or coronadochamber.com.

Each month, the Coronado Island Film Festival presents an “Oldie but Goodie” classic movie at the Village Vintage Theatre. Films are preceded by short, informative introductions. Screening time is 5 p.m. and tickets are $5.

Wednesday, Aug. 30 To Kill a Mockingbird

The benefit regatta brings together racers, community organizations and local families to support Sharp HospiceCare. The event kicks off with a dinner on Friday evening at the Hotel del Coronado, followed by all-day festivities on Saturday as guests board sponsored yachts for an up-close view of the race.
(619) 740-4316 or give.sharp.com/regatta

The three events comprising the fiesta start and finish at Sunset Park, one mile northwest of the Hotel Del Coronado on Ocean Boulevard next to Gate 5, Naval Air Station North Island. The triathlon begins at
7 a.m., the 5K Run at 9 a.m. and the one-mile rough water swim at 10 a.m. Also included is a prone paddleboard competition for youth 18 and under at 8 a.m. (619) 990-2586 or
optimistclubofcoronado.org/optimist-sports-fiesta

AT THE CORONADO LIBRARY:

Explore the history of North Island as a military installation, beginning with the establishment of Rockwell Field to its
present-day role as homeport of several aircraft carriers and the largest aerospace-industrial complex in the U.S. Navy.

Students entering sixth through 12th grades can join any time by signing up at the adult reference desk. Prizes are awarded for every three, six and nine books read.
Last day to report books is Aug. 1; end of teen reading club party to follow at 2 p.m. on Aug. 2.

The reading booth is open Monday through Thursday from 1 to 4 p.m., and on Friday and Saturday from 10 a.m. to noon. Prizes awarded for every 10 books read. The last day to report books is Aug. 8; summer reading club party to follow on Aug. 9 at
3 p.m. and includes a Wild Wonders Animal Show with prizes and goodies for all.

Starting at 3 p.m. in the Library Park adjacent to the Winn Room, participants can make, drink, and even climb into bubbles.

Christian Esquevin, director of the Coronado Public Library, will present a lecture and slideshow about the artist who many consider to be “the father of Mexican modernism,”
11 a.m. in the Winn Room

Head to the Library Park adjacent to the Winn Room at 3 p.m. for outdoor games, relay races, water balloons and tug of war.

Held at the San Diego Convention Center, Comic-Con International is a convention that celebrates the historic and ongoing contribution of comics to art and culture. The popular event is sold out, but grab an outdoor table at a Gaslamp restaurant for some prime super-hero sightings and photo ops.

Bike The Bay is a non-competitive community bike ride for all ability levels. Participants take a scenic bayside ride that includes the only opportunity of the year to bike ride over the San Diego-Coronado Bay Bridge. The 25-mile route begins and ends at Embarcadero Marina Park South and passes through the cities of San Diego, Coronado, Imperial Beach, Chula Vista and National City; a festive celebration with food, entertainment and a beer garden is set up at the race end. Bike The Bay raises funds for the San Diego County Bicycle Coalition, a nonprofit organization that advocates for and protects the rights of bicyclists. bikethebay.net

This outrageous musical comedy is the winner of nine Tony Awards and follows the misadventures of a mismatched pair of missionaries, sent halfway across the world to spread the Good Word. (619) 570-1100 or broadwaysd.com

Nathan Detroit needs some serious dough to keep his “oldest established permanent floating crap game” going. He’s also got his hands full with his marriage-minded girlfriend Adelaide. But when Nathan makes a bet with high-roller Sky Masterson, his problems appear to be solved.

The timeless story of a hero of the people who takes on the powers that be.

The Prince of Denmark comes home from
college to find his father dead, his mother remarried to his uncle, and a spine-chilling apparition roaming the palace grounds. The Globe’s artistic director Barry Edelstein, widely recognized as one of the country’s leading authorities on the works of Shakespeare, returns to the outdoor stage to bring Shakespeare’s exhilarating tragedy to life
under the San Diego stars.

All concerts are held in Spreckels Park. Start time is 6 p.m. unless otherwise noted. 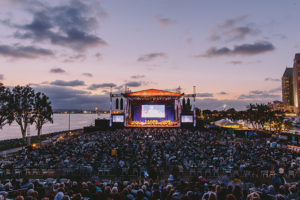 The San Diego Symphony presents a lineup of musicians and films accompanied by live orchestra performances at their bayside concert hall under the stars, constructed just for the summer months. All concerts begin at 7:30 p.m. and take place at Embarcadero Marina South. (619) 236-5403 or sandiegosymphony.org

July 28: Hooray for Hollywood: A salute to movie music

July 29 & 30: Harry Potter and the Chamber of Secrets in Concert (film screening accompanied by live orchestra)

Theme is “A Salute to America.” Parade runs along Orange Avenue from First Street to Churchill Place.

A re-creation of Western European culture between the years 1066 and 1603.

Society members will be available for questions and photos